Ashamaka and the Nart bonfire: Day of Remembrance of the Victims of the Caucasian War was commemorated in Abkhazia

The Day of Remembrance of the victims of the Caucasian War was commemorated in Abkhazia by laying flowers at the monument, lighting the Ashamaka candle and the Nart bonfire.

On May 21, Abkhazia commemorated the Day of Remembrance of the Victims of the Caucasian War. On this day, events and sports competitions were held in Sukhum dedicated to the memory of the Abkhazians who died and suffered as a result of the events of the middle of the 19th century. 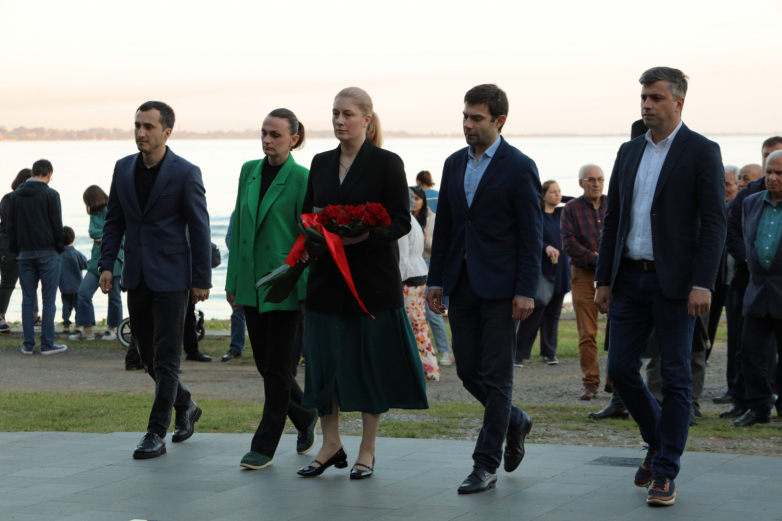 The events began in the morning with the laying of flowers at the memorial to the victims of the Caucasian War. Leaders of the Republic, repatriates, mothers of soldiers perished during the PWPA, the public, and schoolchildren came to honor the memory of their ancestors on the Makhadzhirs Embankment. For the purpose to spend this day in Abkhazia, representatives of the Diaspora from Turkey, Jordan, Syria, and from the fraternal republics of the North Caucasus arrived. 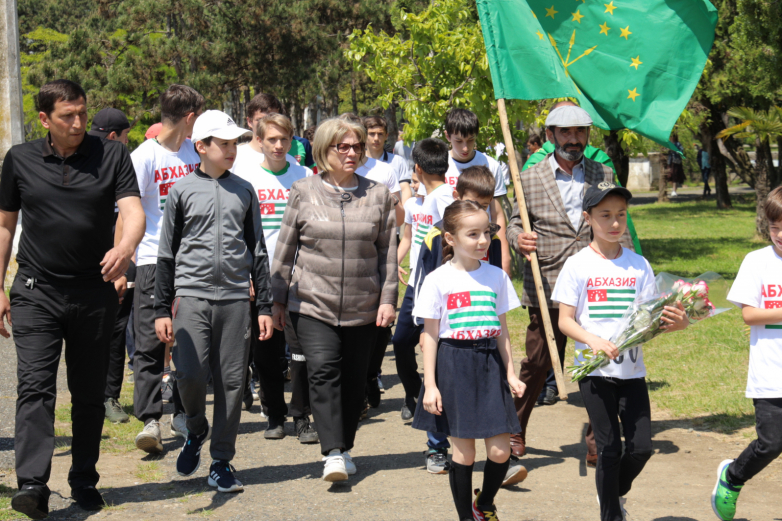 Sixth grader Sariya Agrba participated in the commemorative events for the first time, but showed a good knowledge of the history of her people.

"I know that there was a Caucasian war that lasted a very long time. Then, when it ended, many Abkhazians were forced to leave Abkhazia, and now a lot of Abkhazians, a lot more than here with us, live abroad, in other countries around the world," the girl said.

Cavalier of the Order of Leon Tatyana Kochiy annually comes to the monument with her friends and relatives.

"I have grandchildren - Abaza and Abkhazians, how can I not come to commemorative events on such a day? We always need to refresh our memory so that there is no destruction of our nation again. During forced resettlement in Turkey, a huge number of people died. For a long time, the Caucasian people did not eat fish, mindful of how many bodies fed the marine fauna," she said. 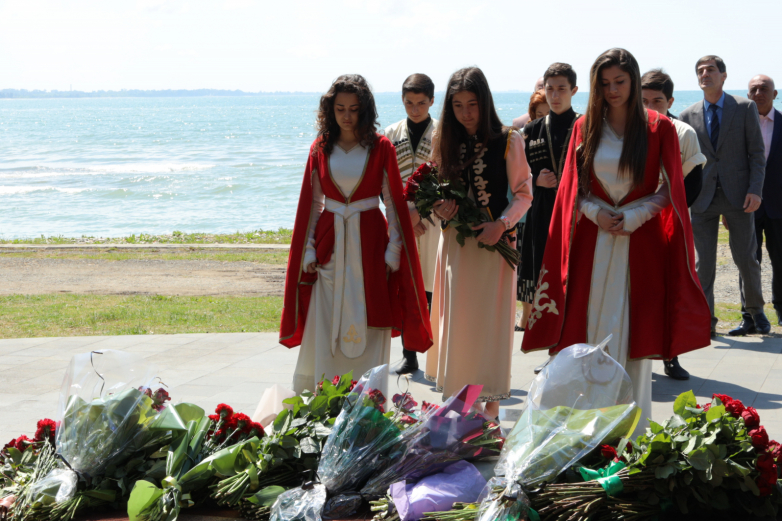 Six fir trees were planted around the monument. Both officials, deputies, representatives of the Diaspora, as well as children who were present at commemorative events, threw ground into the holes under the root of the tree.

"People say that if a child has a hand in such a matter, then the root of the tree will easily stick and the spruce will quickly grow, like the growing body of a child," an elderly man remarked.

In the same place, near the monument, there was an exhibition of photographs from the fund of the Gudauta State Museum of the PWPA, which depicted famous representatives of the Abkhazian Diaspora.

Zurab Marshania, a participant in the event, found his famous namesakes in these photographs and willingly told about them.

"Tatash Marshania was in the first parliament at the beginning of the 20th century (the first legislative body of Abkhazia - the Abkhazian People's Council (APC) was created on November 8, 1917 - ed.). Here is Marshan from the village of Tsabal," he showed faces in the photographs. "I found documents that say that my grandfather and his brothers were the last Abkhazian princes who laid down their arms after the Caucasian War."

An exhibition at the Abkhazian Drama Theater was timed to coincide with the Day of Remembrance of the Victims of the Caucasian War. Pictures of young repatriate artists were exhibited here, who, having returned to their historical homeland, mastered, acquire professions and are engaged in creative work.

One of the participants of the exhibition, the artist Can Set Aryutaa, moved to Abkhazia with her parents and brothers in 2011, when the war broke out in Syria.

"We knew from childhood that we are not Arabs, but the descendants of the Abkhazians who moved to Syria due to tragic historical events. We have been living in Abkhazia for ten years, we have settled in, this is our homeland, our home," she said.

The young artist received her higher education at the Abkhazian State University, graduated from the department of arts in the major of "graphic design".

"I work according to my main major, but I also paint pictures. This exhibition also includes paintings by my brother and uncle and his son. This is the kind of creativity that many in our family have," the girl smiled.

In the afternoon, within the framework of the program of events, a mini-football tournament and an athletics cross-country race "Big Nart Races" dedicated to the memory of the victims of the Caucasian War were held.

Commemorative events on the Day of Remembrance of the Victims of the Caucasian War continued in the evening - again on the Makhadzhirs Embankment. The WAC once again organized the traditional lighting of the memorial Abkhazian candle Ashamaka on the seashore.

The World Abaza Congress has been specially making it for the event for several years with the help of the artist Timur Dzidzaria, involving young students to work, so that they learn how to make the candle.

"In the artist's studio, we plunge into a kind of meditative process of making ashamaka. This is a painstaking work. We make special knots from bandages, then we rub them with wax, at the next stage they are dipped into melted wax. At the last stage, we create special patterns from these candles on a large tree-like candle. We tried very hard and, with the tips of the artist, made the drawing more difficult than last year," Alisa Pachalia, head of the "AMCH" public organization, proudly noted.

A young repatriate from Syria, a graduate of the Faculty of International Relations of the ASU Anzor Aryutaa also learned how to make a ritual candle this year.

"I am grateful to the World Abaza Congress for giving me the opportunity to participate in the process of making ashamaka. I was lucky to gain knowledge that could have been lost over time. I believe that the production of ashamaka and other traditional elements should be preserved and passed on to the next generation. The process itself was exciting for me, I did it for the first time, and I hope I will apply my skills next year," the young man shared.

Igor Chachkhalia, who came to the Embankment in national clothes, was asked to light a tree-like candle. It turned out beautifully and symbolically: at that time, "Shysh nani" was heard from the speakers, a musical composition that reflects the tragedy of the entire people and their forced resettlement from their native lands during the war years and after it.

"We do not have those who would not know about this historical fact. What all the peoples of the Caucasus - Adygs, Abkhazians, Kabardians survived is passed from mouth to mouth. There is probably not a single family that would not have been affected by the consequences of the Caucasian war. In families, everyone has someone who left their homeland without accepting the outcome of the war. Anything can happen in history, we do not politicize today, we only pay tribute to the memory and respect for our ancestors," said Artur Aloev, holder of the Order of Leon.

After some time, according to tradition, unburned wax threads of a candle were distributed to all those present at the event in order to place "lights of memory" along the entire embankment.

Commemorative events on May 21 ended with the putting of wreaths into the sea and the lighting of the traditional Nart bonfire from the legends of the Nart epos.

The memory of the victims of the Caucasian War is commemorated annually on May 21. On this day in 1864, a military parade was held in the Kbaada tract (today Krasnaya Polyana in Russia - ed.) in honor of the end of the half-century Caucasian war of 1817-1864, which forever deprived hundreds of thousands of people of their historical homeland. Whole families of people moved to the Ottoman Empire, and from there life scattered them all over the world. Every year, actions in memory of the victims of this tragedy are held not only in Abkhazia, but also in all countries where the Caucasian Diaspora lives.

Making of ashamaka: technology in detail
Making of the Abkhazian memorial candle of ashamaka

Abraskil spoke in English: WAC translated the Abkhazian cartoon
Winner stage: "Abaza" graduate became a coach in St. Petersburg
The Museum of Anthropology and Ethnography released a collection "Caucasus: Crossroads of Cultures"
Famous compatriots: Adnan Kabartay told about the Abkhazians of the Middle East
All publications