Four amateur teams from different parts of Abkhazia competed for the title of champions in the first folk games tournament "Ахьышьҭра".

Competitions in Abkhazian folk sports games were held in Sukhum for the first time.  The tournament was timed to coincide with the 29th anniversary of the liberation of the capital.  The games were attended by four teams of schoolchildren from 14 to 16 years old from Duripsh, Dzhgerda, Chlou and Sukhum, who measured their strength in the folk games "Аимцакьачара" (Abkhazian folk ball game - ed.), "Ахылпахас" (in translation from Abkhazian means "catching a hat" - ed.) and "Акьыброу" (Abkhazian folk version of the game of pegs - ed.).

The competitions were organized by the Municipal Administration of Sukhum with the support of the World Abaza Congress. 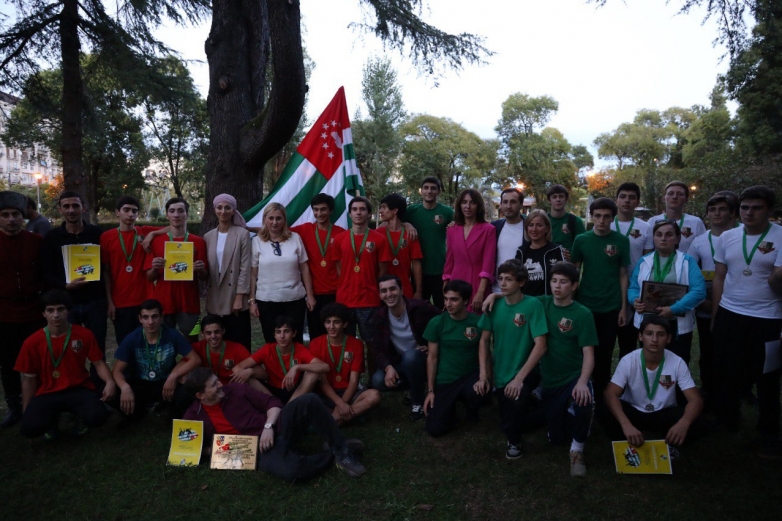 Victoria Kvitsinia, an employee of the Department for Youth and Sports of the Administration of the capital, addressed the young players with a welcoming speech, who noted the importance of popularizing folk sports among young people and expressed her hope that the tournament would be held in Sukhum on a regular basis.

"Folk sports games have been part of the Abkhazian culture for centuries. Today we have taken the first step to attract young people to this sporting tradition, which needs to be revived further," she noted.

The head of the WAC Sukhum office, Temur Rekvava, congratulated the athletes and guests of the competitions on the opening of the games, and also stressed that the promotion of folk sports among young people, along with other Abkhazian traditional activities, is one of the key areas of work of the Congress. 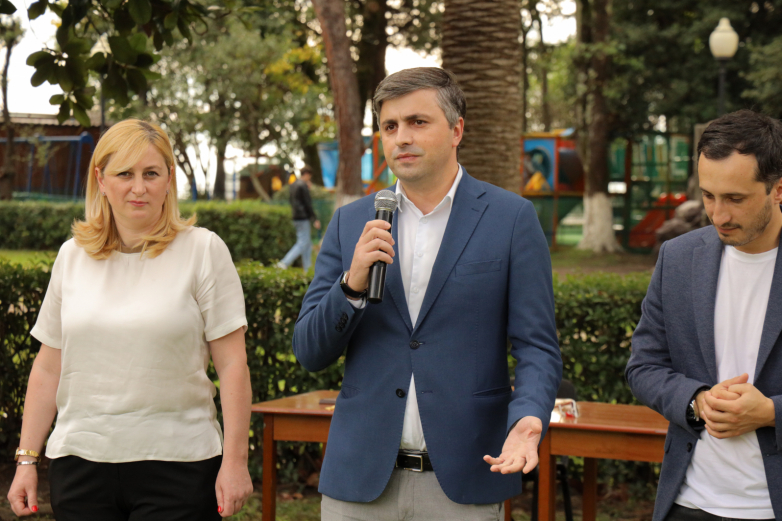 Competitions in three folk games "Аимцакьачара", "Ахылпахас" and "Акьыброу" lasted for several hours. The "Аимцакьачара" matches were the most spectacular: team captains knocked down a felt ball with wooden sticks, and the rest of the players tried to possess it and, having caught it, run across the field to the opponent’s side as fast as possible, thus earning a point for their team.  In the final of the game, young athletes from Chlou and Dzhgerda met. The guys spared no effort, demonstrated extraordinary speed and agility, and after two intense rounds the team from Chlou won with a score of 8:2. 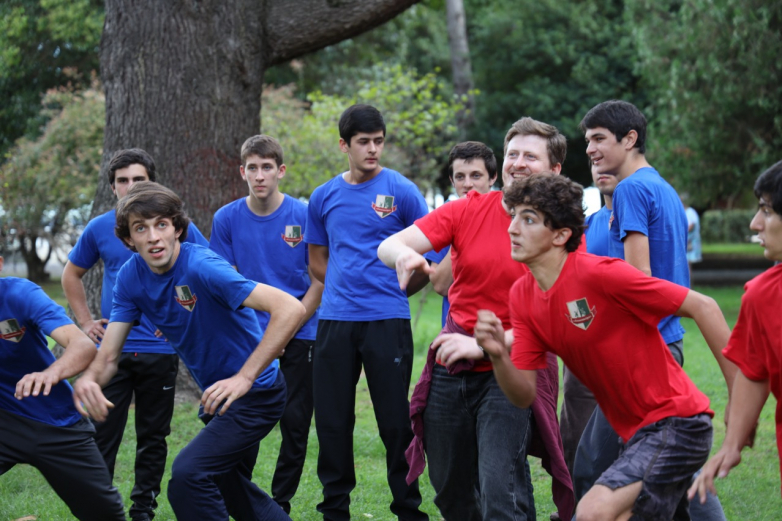 Good luck accompanied this team in other games. In the final of the "Акьыброу" competition, athletes from Chlou beat the team of the Sukhum Secondary School No. 1 named after B.V. Shinkuba. In this game, the guys had to fulfill the following terms by lot: holding a long stick stuck into the ground by the loose end, put a clenched fist on it, place a smaller wooden stick on the fist and use the third stick to try to throw it as far as possible, after which the third stick had to be attached to the one that was stuck into the ground, in such a way as to create the shape of a "cart".  At this time, the player of the opposing team had to catch the tossed stick or pick it up from the ground and try to knock down the cart.

Despite the fact that the team of Damey Enik from Sukhum Secondary School No. 1 lost to athletes from Chlou in this discipline, he highly appreciated the efforts of his comrades and promised that next year they would work even harder to win. 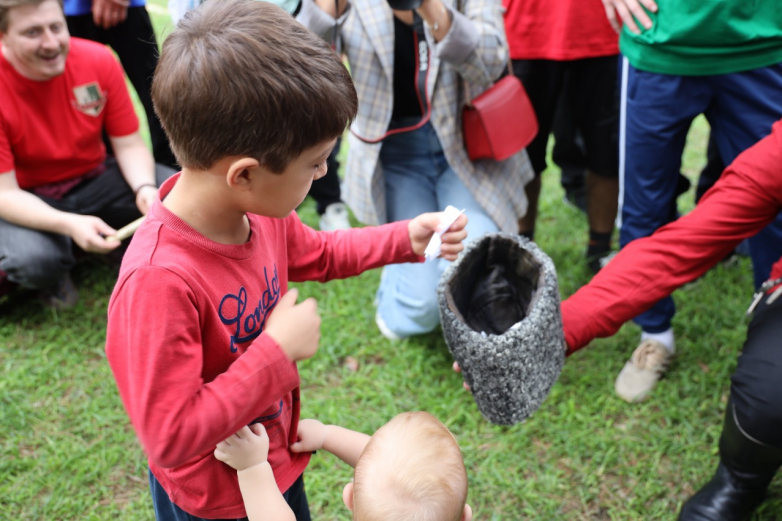 "We do not see invincible rivals. Our team just needs to gain experience. In the future, we are going to take part in folk games tournaments and will try to take first places," said Enik.

Especially for the "Аимцакьачара" competition, a stick was installed in the center of the playing field, on which they hung "ахылпарч" (traditional Abkhazian men's headdress - ed.). On opposite sides of the stick, 15 and 20 steps away, there were two players from different teams. The task of the participant standing on the near line (15 steps) was to grab the "akhilparch" and return back to his place, which was to be prevented by his opponent from the far line (20 steps). The guys from Chlou also won this game.

Astamur Inapshba, an athlete from the Chlou team, who was recognized as the best player of the tournament, associated his personal achievements and the success of his comrades with serious preparation. 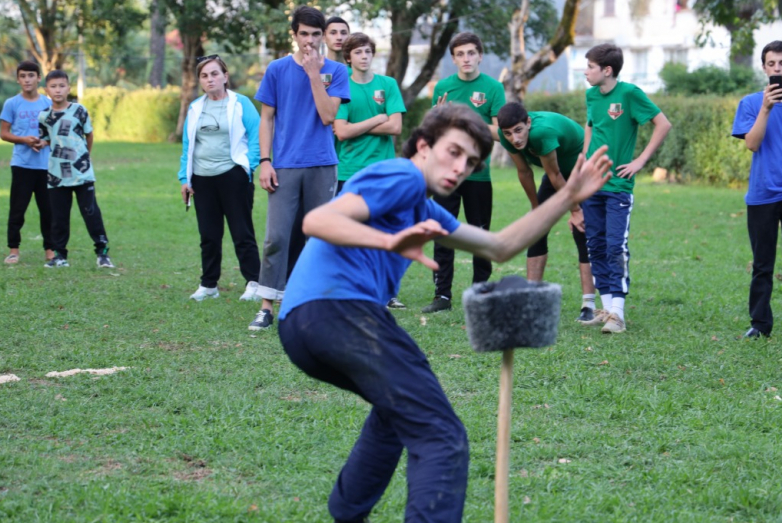 "All the teams performed very well. However, as in any game, someone has to prove himself better than the rest. Our team has trained a lot. I think that's why we won," Inapshba expressed his assumptions.

The coach of the Chlou team Ansou Anua said that his wards fell in love with folk sports and diligently prepared for the tournament. That’s why they won in all three disciplines.

"Despite the fact that there was little time for preparation, the team wanted to show their best, so we practiced almost every day. Moreover, many students of our school are very fond of these games and especially for them we even introduced separate folk sports lessons," said Anua.

The chief referee of the tournament Adgur Gunba highlighted knowledge of the rules of folk games, good physical training and the desire to win among all the participants of the competition. 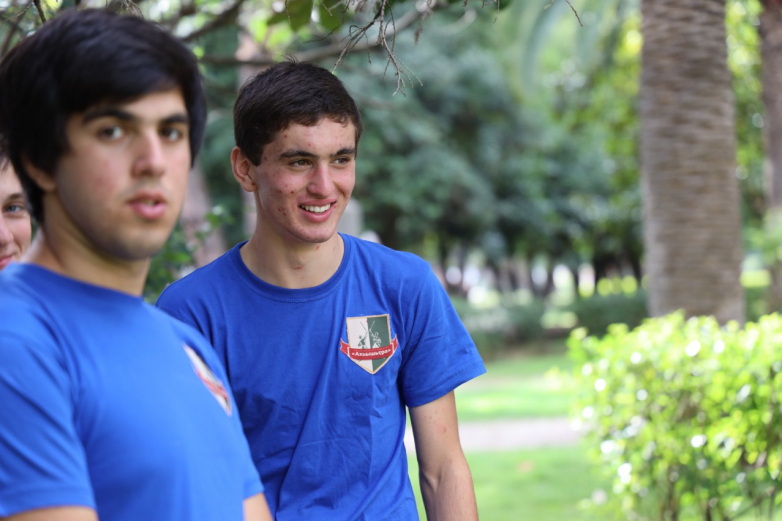 "The guys approached the preparation for the tournament very responsibly, learned the rules of the games thanks to the master classes conducted by the WAC team. Most importantly, their eyes light up, they like to play, they strive to score a goal, to win. Therefore, I think that folk sports have a great future," Gunba shared his impressions.

According to the head of the Department of Youth Development and Physical Culture of the WAC Valery Berzenia, the organization of the tournament was preceded by serious work with schoolchildren, for whom introductory lectures on the history of the Abkhazian folk games and special master classes were held.

"We managed to interest the youth. We not only told, but also showed them how to play "Аимцакьачара", they actively joined the game. Once the guys started playing, there was no way to stop them," Berzenia said. 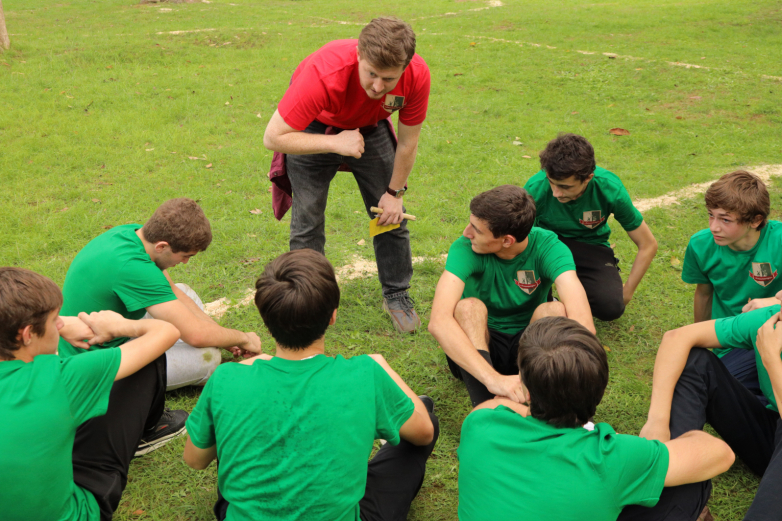 He also noted the special value of folk games as an element of the culture and history of Abkhazia.

"Folk games are a link between generations. This is our history, what originated in Abkhazia and flows in our veins. It is a great honor for me to take part in a project that helps to develop them," Berzenia emphasized.

Specially for the opening of the tournament, the "Ахьышьҭра" emblem was designed with the image of two players in "Аимцакьачара", dressed in national Abkhazian costumes, which could be seen on the uniform of the participants in the games, also specially prepared by the organizers for young athletes. In addition, the Administration of Sukhum prepared souvenirs for the participants of the tournament - medals and certificates, as well as special plaques for schools. 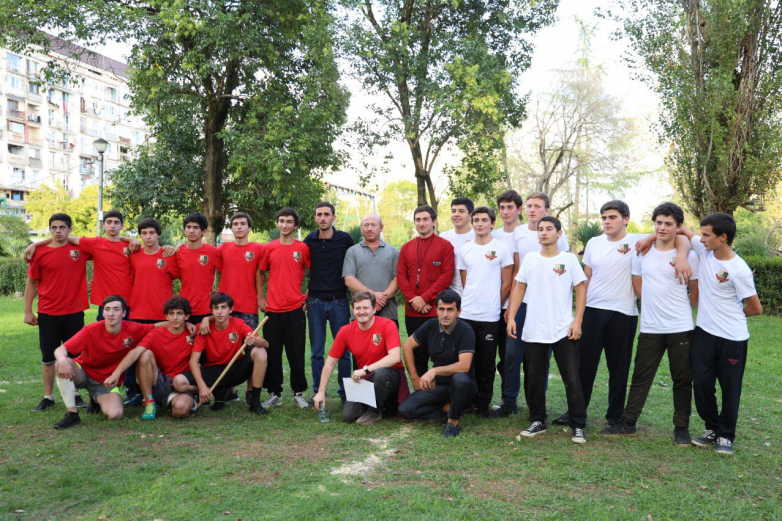 Representatives of the WAC shared plans for the further development and promotion of the Abkhazian folk games among young people, in particular, the intention to make the "Ахьышьҭра" tournament an annual event and to gather more than ten teams from different regions of Abkhazia on the playing field next year.