Language as a key to the history of the people: a lecture on the Abkhaz language was held at the WAC office

The Sukhum office of the WAC held an open lecture "The Abkhaz language is the oldest source in the study of the history of the people". The lecture was held by the historian Dzhambul Indzhgiya.

An open lecture by the candidate of historical sciences, member of the Supreme Council of the World Abaza Congress Dzhambul Indzhgiya on the topic "The Abkhaz language is the oldest source in the study of the history of the people" was held at the Sukhum office of the WAC on Wednesday, May 11.

At the beginning of the meeting, the head of the Women's Councils of the WAC, Geta Ardzinba, noted that the Congress team decided to continue the format of the lecture hall, since previous lectures in the framework of the historical and ethnographic cycle (it was started by ethnographer Marina Bartsyts - ed.) became popular and aroused great interest of the audience in the topic.

"Dzhambul Indzhgiya offers a new approach to the topic of studying the history of Abkhazia - through the prism of language. The study of the etymology of words, their origin, the word construction system provides interesting information that reveals the code of the Abkhaz language, the interaction of Abkhazians with the world, with society, with nature, with the surrounding reality," Ardzinba presented a new part of the lecture hall.

Dzhambul Indzhgiya said that the language of the people is the same historical source of information about human activity as others: written, material, ethnographic, monuments of oral folk art, anthropological, photographic and sound documents.

"Words are spoken by everyone, but few people in everyday life think about their origin. The history of the people is revealed often in these words," he emphasized and explained his idea with examples.

Therefore, some "over Ingur" researchers - Dzhambul Indzhgiya called them "pseudo-historians" - have theses that the Abkhazians do not have maritime terminology, and therefore they are supposedly non-indigenous inhabitants of Abkhazia.

"Such false conclusions are refuted by an elementary knowledge of the Abkhaz language - there was not only the marine terminology, but it is still used by the people. There were ships ("аӷба" which is "ship"  in Abkhaz - ed.), up to the fact that in the 19th century the Turkish Sultan issued a separate order to protect the sea coast of the Ottoman Empire, since the Abkhazians were committing acts of piracy," said the historian.

The lecture turned out to be not academic, when the teacher at the department talks, and the audience only listens, but more interactive. Dzhambul Indzhgiya set a specific task of finding an answer to a question, and then he himself, with leading questions, helped the audience to reach the right idea and draw a conclusion. The historian voiced a kind of "keys" that helped the lecture participants to reveal the origin of a particular word.

More listeners came to the meeting than expected: the small office of the WAC was overcrowded.  Geta Ardzinba believes that this is an important indicator, meaning that "there is a demand in the society for such topics."

"We had a lot of guests today. We are glad that our project, started last spring by ethnographer Marina Bartsyts, has a continuation. I am sure that the series of lectures by Dzhambul Indzhgiya will arouse the same interest, and there will be as many listeners at the next lectures," she said.

Dzhambul Indzhgiya, in turn, shared that the topic of the lecture was born to him after a "five-hour intellectual friendly conversation" with the staff of the World Abaza Congress a little earlier.

"We had a very interesting conversation on the origin of Abkhaz words, I gave examples. Many people know the words, but do not know their origin. It is always very interesting to trace this chain. It was decided to hold a lecture on the Abkhaz language, since the language is the oldest source in the study of the history of the people," the historian explained.

Eric Mikaya from Sukhum was among the lecturers. The man remembered that he knows the meaning and origin of many words that were spoken at the lecture from communication with his relatives in his family.

"Even as a child, visiting my grandparents in the village, I heard a lot. Today I realized that apparently I knew a lot. Some of my peers did not believe in the meaning of the words that I voiced, and today, after listening to a historian, I was convinced that I was right. They should’ve trusted in me," Mikaya shared his impressions and urged everyone to come to the next lectures.

A 4th year student of the History department of the Abkhazian University Milana Shamba and her friends learned about the lecture at the WAC through social networks. They used to listen to the historian's lectures at the university and assumed that the event with his participation would be very interesting.

"Dzhambul Indzhgiya’s course of lectures at the University was not enough for us, it is a well of knowledge. We decided to come to the lecture at the WAC. The lecturer built these "threads" for us, told how everything is interconnected, that history cannot be without language, and language without history," shared Milana Shamba.

After listening to the lecture and learning the details of the origin of the words, the young director Daut Logua expressed regret that he did not speak the Abkhaz language properly.

"As I get older, I understand how deep and beautiful our language is, and there is a desire to learn it.  We heard today that the history of a people is inseparable from the language. I was extremely interested, I got involved in this topic, I wanted to continue and study it in more detail. I will probably do this," summed up Daut Logua. 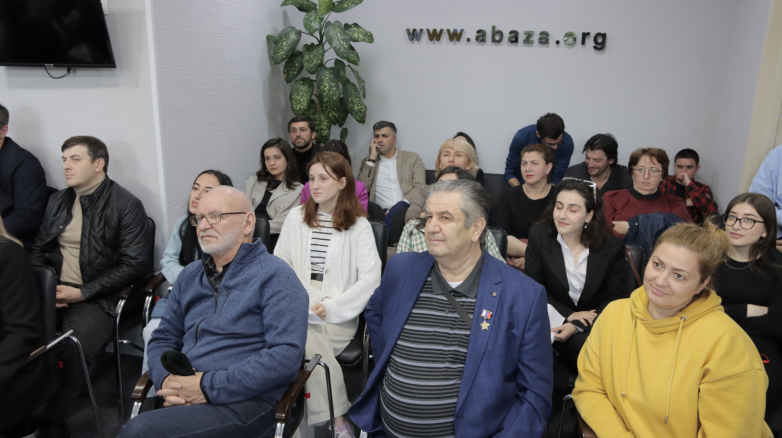 Language as a key to the history of the people: a lecture on the Abkhaz language was held at the WAC office
© WAC / Sasrykua Agukhaa

The Sukhum office of the WAC is going to hold two more open lectures by the candidate of historical sciences Dzhambul Indzhgiya on "Алабашьа (staff - ed.) in the traditional culture of the Abkhazians" and "On the issue of metrology of the Abkhazians". The date and time of the lectures will be announced in the official social media accounts of the Congress. Lectures are open for general public.

Abraskil spoke in English: WAC translated the Abkhazian cartoon
Winner stage: "Abaza" graduate became a coach in St. Petersburg
The Museum of Anthropology and Ethnography released a collection "Caucasus: Crossroads of Cultures"
Famous compatriots: Adnan Kabartay told about the Abkhazians of the Middle East
All publications