Love, proved by work: Abkhazia in the thoughts and life of Irfan Argun

On April 21, a prominent representative of the Abkhaz Diaspora in Turkey, Irfan Argun, would have turned 85. Through all his life, he carried an unusually warm feeling of love for his native land, the strength of which he proved with works for the good of Abkhazia.

A well-known businessman and public figure Irfan Argun was born in the small village of Ankhua near the Turkish city of Düzce. His ancestors were there after they were evicted from Abkhazia in the 19th century (as a result of the Caucasian war of 1817-1864 – ed.). Their closest relatives, with whom Argun has always maintained contact, also live in the village of Ankhua, but already in Abkhazia. As you know, during the forced relocation of Abkhaz to Turkey, families and people from some places tried to settle together, and they called the area that they settled in a foreign land, just as their village in their homeland. 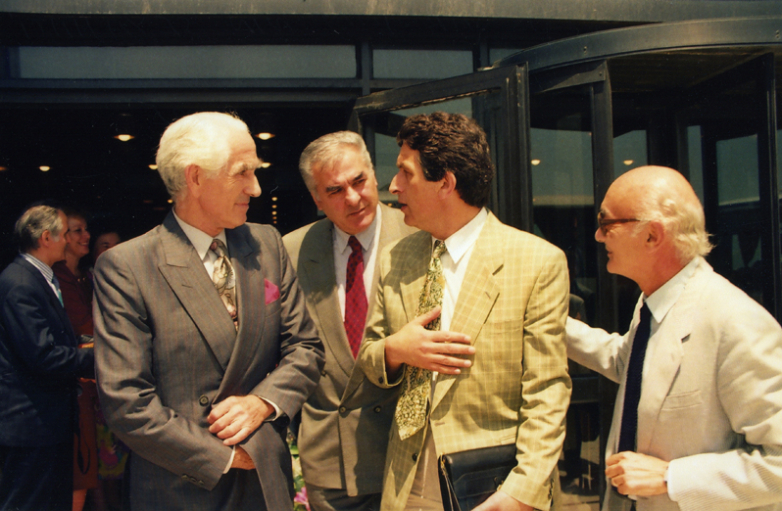 Businessman brought up in the Abkhaz way

Irfan Argun was an economist by profession, specialized in business management. From a young age, he showed himself to be a brave and determined businessman: he was not afraid to take risks and do things that no one had done before. For example, the first to open a duty-free shop in Turkey. He also was a co-owner of a successful travel company. Irfan Argun owned part of the income of one of the structures of the Turkish Airlines.

“He was one of the most famous businessmen in Turkey, - says a repatriate, former political figure, translator Oktay Chkotua, who knew Irfan closely and was friends with him. - In his hands was a fairly large-scale business. Even before the war, immediately after the first contacts with Abkhazia, he united Turkish businessmen, Abkhaz and Adygs, and founded the firm “Nartash”. They introduced the first capital into Abkhazia through this company. It was then that he came to Abkhazia for the first time in 1990. They had plans to work here, but then the war began (the Patriotic War of the people of Abkhazia – ed.), the blockade, and this activity could not be continued.”

However, Irfan Argun was not just a businessman: he was an Abkhaz who had the means and sufficient influence to help Abkhazia. Irfan worked on this for many years, and he succeeded: he had a great desire to be useful to his homeland and many exceptional qualities.

“He was not just a successful businessman, he was brought up in the Abkhaz way, he lived according to the canons of Apsuara, - Chkotua recalls. - He was a man of strong character and even sometimes strict, which, by the way, caused even greater respect for him.”

All this played a significant role in the fact that even before the start of the war in Abkhazia, Irfan became one of the three representatives of Vladislav Ardzinba in Turkey, said Oktay Chkotua.

“The three of them, along with Atai Tsushba and Chingiz Gogua, were not in vain representatives in Turkey: they were people respected in the Diaspora whom they trusted,” explains Chkotua. 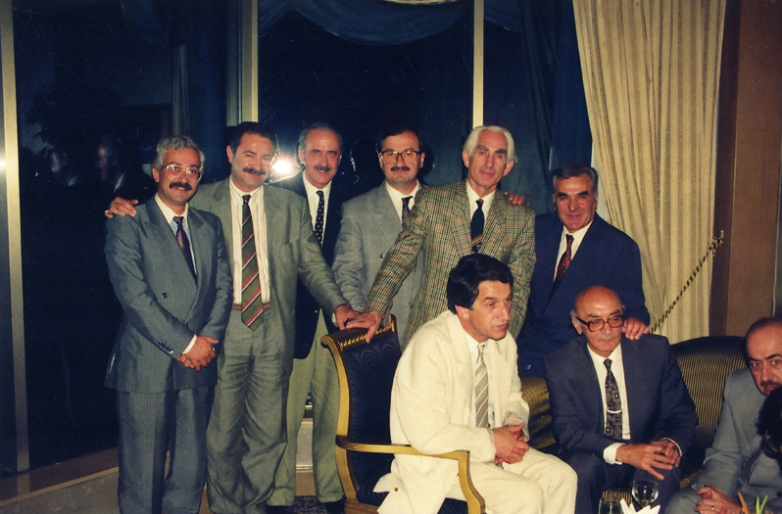 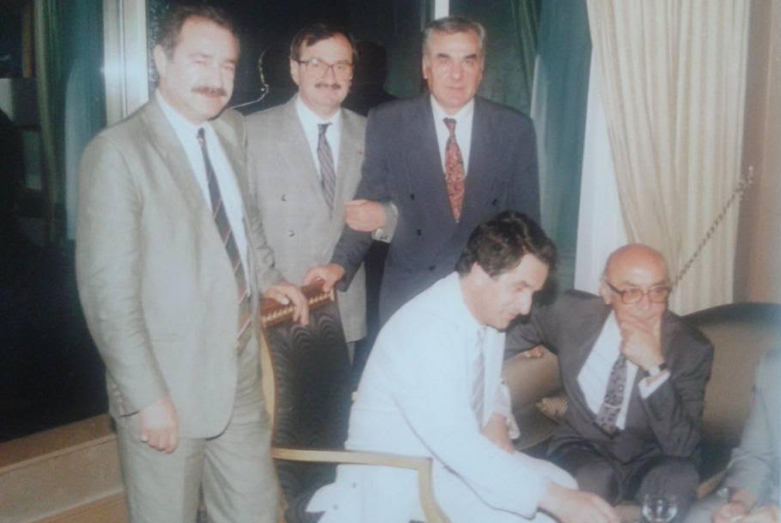 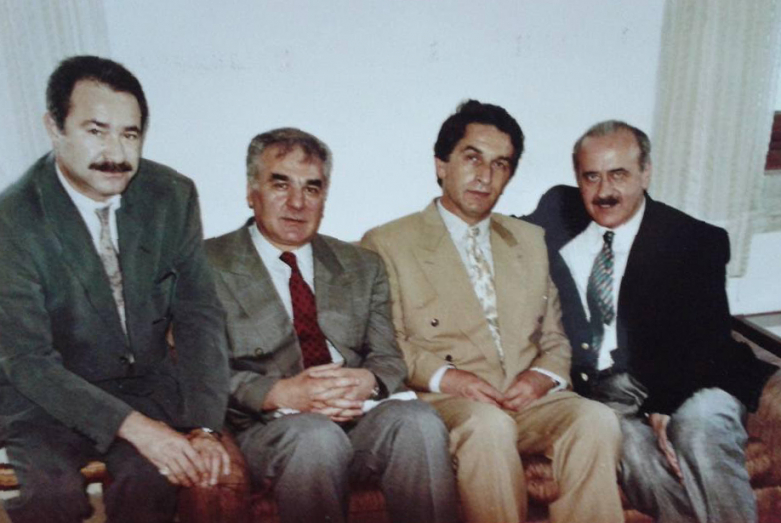 Support Abkhazia: not by office, but by blood

When the war broke out in Abkhazia in 1992, Irfan Argun became one of those on whose initiative the Caucasus-Abkhaz Solidarity Committee of Abkhazia was organized in Turkey. At the very beginning, it was headed by Atai Tsushba, and Argun was one of the deputies, later the committee was headed for some time by Jamalettin Ardzinba, and then for 16 years Irfan Argun was at the head of the committee.

“The committee had the sole purpose of fully supporting Abkhazia - politically, diplomatically, in the sphere of business, in matters of repatriation. That is, all the issues that concerned Abkhazia were decided in this particular committee. And Irfan ruled it all,” Chkotua says. 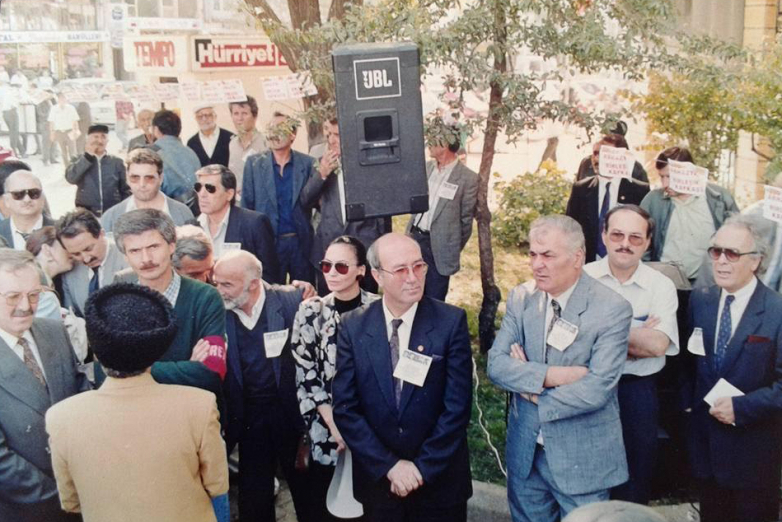 Irfan Argun at a rally in support of Abkhazia, Istanbul, 1992
© From the archive of Oktay Chkotua. Photographer: Abdulkadyr Ardzinba

Argun has been to Abkhazia many times at different periods, participated in conferences devoted to the problems of Abkhazia and the Diaspora, and repeatedly attended the congresses of the Abkhaz-Abaza people as the head of the committee.

“I’m not mistaken if I say that about 80 percent of the committee’s activities were on Irfan’s shoulders, - said Oktay Chkotua. - At the same time, he took over the overwhelming part of a particular job and almost all the funding. Most of the financial expenses of the committee were covered from the personal income of Irfan Argun, not counting any personal contributions from other members of the Diaspora, which, of course, were also there.” Delegates of the First Congress of the Abkhaz-Abaza people in the village of Lykhny October 1992
© From the archive of Oktay Chkotua. Photographer: Abdulkadyr Ardzinba 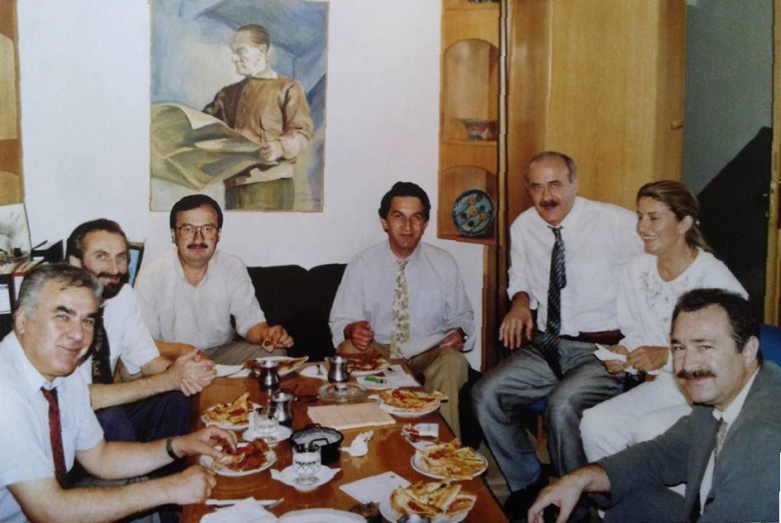 Chkotua recalls that Argun participated “absolutely in all the cases where Abkhazia was once mentioned.” Moreover, he considered himself obliged to do this not by office, but by blood, by origin.

“He helped everyone who wanted to go to Abkhazia, and met everyone who came to Turkey: journalists, scientists, all kinds of people we sent from here (from Abkhazia – ed.) for treatment, students. It seems to me that there was not a single case, about which he would not know and in which he would not help. He did this in the committee, but that was the character of Irfan: he had to be aware of everything, and if it were necessary, he would help.”

Oktay Chkotua is sure that what he knows about Argun’s help and affairs for the well-being of Abkhazia is only “the tip of the iceberg”: no one knew the scale of Irfan’s activities, and he never told about it, did not boast about his actions. 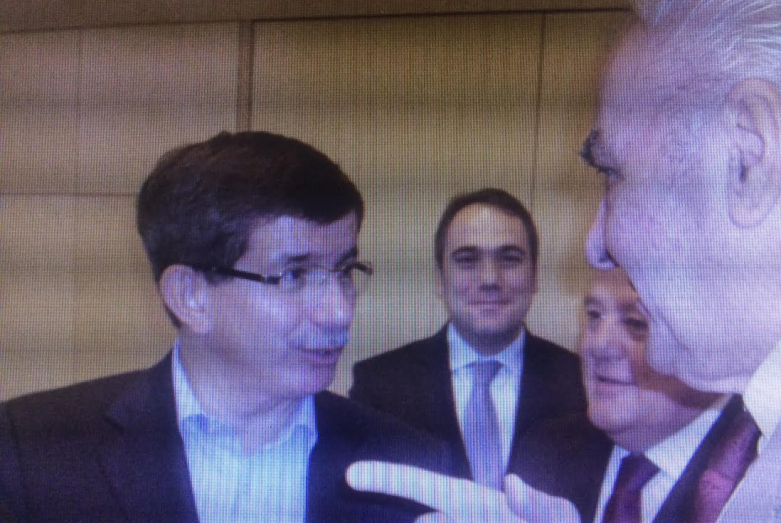 Akhmet Daut-oglu, Minister of Foreign Affairs, later Prime Minister of Turkey and Irfan Argun, behind him on the right - Ershan Aigba
© From the archive of Oktay Chkotua. Photographer: Abdulkadyr Ardzinba 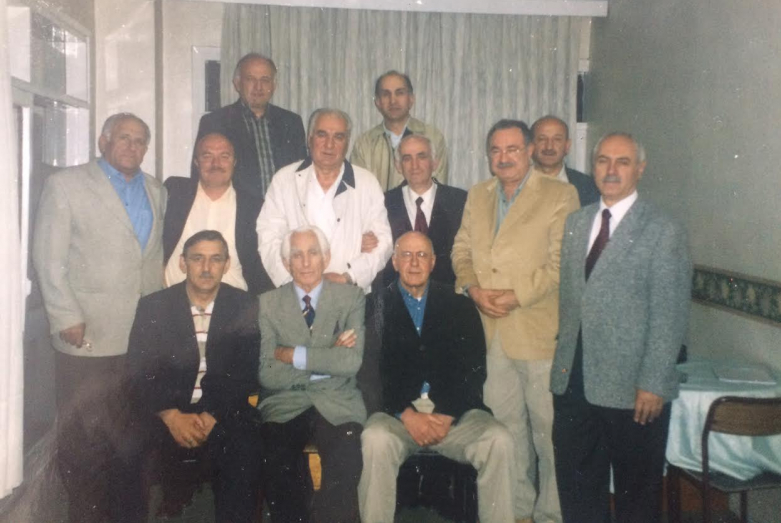 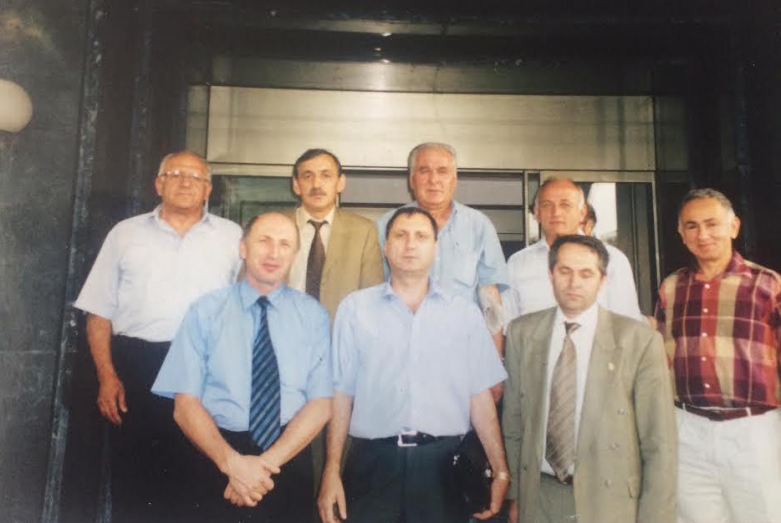 A tall, stately man, absolutely principled in matters related to his historic homeland, never afraid to openly express his thoughts or opinions to officials of any rank, not afraid to lose his place or business - such was Irfan Argun, according to those who knew him well.

He would not under any circumstances agree to do something that would go against the policies of the Abkhaz state, Oktay Chkotua is sure.

“Irfan Argun absolutely freely defended the rights of our state before Turkish officials - the President, the Prime Minister and Ministers. I myself saw those letters that he sent them, had been to meetings. His principles and steadfastness in matters of upholding the interests of Abkhazia can still be an example for many today. There are protocols, documents in archives, all this can be studied. If all this opens, it will become obvious to everyone how much he did for Abkhazia, how he was a true Abkhaz, a patriot, and even more - a hero.” Bediz Kvaratskhelia on the left, Vladimir Avidzba, Vladislav Ardzinba, Irfan Argun in the center, Sergey Bagapsh behind - as part of the Abkhaz delegation in Turkey
© From the archive of Oktay Chkotua. Photographer: Abdulkadyr Ardzinba

This hero - principled, strict and at times even harsh, became soft-hearted and even sentimental, as soon as it came to his native places in Abkhazia, the village of Ankhua.

“He could have shed a tear when he listened to stories about those who died for the liberation of Abkhazia, he took even those things that became commonplace for us to heart. We - all those who returned to their homeland, when they first saw the land of their ancestors, experienced almost the same [strong patriotic] feelings. However, Irfan Argun was somehow very [different], for him Abkhazia was something completely special, was the center of sentimental feelings of this strong man, and he proved it with his activity and life.” It is completely different “at us”

Oktay Chkotua notes that in friendship with Irfan they were united by common ideas and thoughts, and all of them “were connected with Abkhazia.”

“We met, both when I was in Turkey, and when he came here, - says Oktay. - In recent years, Irfan’s health has been greatly undermined, he underwent several surgeries, after which he could not come here. He suffered from this very much, missed Abkhazia. Being in Turkey, he called me almost every other day.” Chkotua recalls that they could talk on the phone with Irfan “really for hours”, discussing what was happening in the Republic, all the news, recalling mutual acquaintances and different people. He loved to talk about Abkhazia.

“Sometimes, he asked me to send a package with someone who flies to Turkey, our achashe or other dishes of Abkhaz cuisine. Not that they did not cook it in Turkey, but he was convinced: it is completely different “at us”. We were friends, respected each other. I appreciated him very much, and now, when he is no longer with us, I often remember him, our conversations,” says Oktay Chkotua. 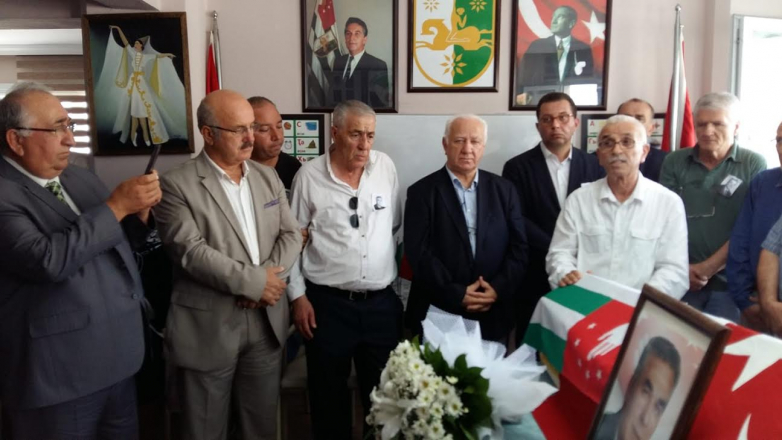 Irfan Argun died on August 27, 2016. He is buried in his hometown of Düzce. Prominent representatives of the Diaspora took part in the farewell ceremony, and Abkhazia was represented by a delegation led by the Chairman of the State Repatriation Committee Vadim Kharazia.

The son and daughter of Irfan Argun - Murat and Sevde Argun - have been to Abkhazia more than once and have Abkhaz citizenship.

Diaspora Personalities Anniversary Irfan Argun
To leave a comment you need
to login or register.
Share
No comments