The WAC launched a series of first aid trainings as part of the work of the new department of the Congress on Education, Social Activism and Health (CESH), led by Izolda Khagba with a meeting with schoolchildren in the village of Abgarkhuk.

Within the framework of the new project of the WAC, together with the invited specialist of the Ministry of Emergency Situations, Indira Amichba, a training was held on first aid for schoolchildren in the village of Abgarkhuk. As part of the visit, a master class on national games was also held for children as well as cartoons and a film of the "Amazara" WAC project were shown.

The head of the CESH department, Izolda Khagba, said that first aid trainings would be carried out in other local branches of the WAC.

"To implement this, in our opinion, important project, we invited Indira Amichba, a specialist from the Ministry of Emergency Situations, who, on a volunteer basis, agreed to adapt the training program for schoolchildren and teach them first aid. At the training, the children were told how to properly provide first aid for burns, bruises, fractures, bleeding, sunstroke, loss of consciousness.  The students enthusiastically participated in the training. They learned how to bandage wounds on their hands, on their heads, on their feet, and learned the technique of artificial respiration. In the practical part of the training, the students showed their knowledge to each other, which caused even more enthusiasm among the students," Khagba said.

According to Izolda Khagba, within the framework of this project, each school will be given a pharmacy kit consisting of the necessary first aid supplies: antihistamines, painkillers, antipyretics, bandages, adhesive plasters, masks, thermometers, burn remedies and more. 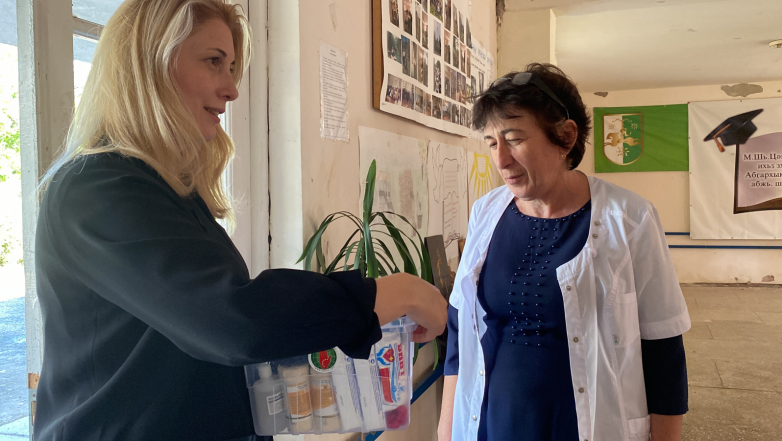 "CESH specialist Naur Khishba has developed a meaningful memo, which reflects all types of assistance. Stickers with pictures for maximum convenience of information perception in printed form will be provided to each school where trainings will be held. I would also like to express special gratitude to Said Smyr and Levan Kharchilava, the owners of the Vita Farm pharmacy, for providing drugs for pharmacy kits. It is very important that next to us are people who are not indifferent to such social projects and understand the relevance of this topic," she added.

According to MES specialist Indira Amichba, she experienced a lot of positive emotions from the training.

"I believe that every school should have such lessons so that every child has an idea of ​​how to provide first aid. The training session left only positive emotions. Attitude of children to the lesson pleased me incredibly. It is very nice to see how enthusiastically they listened and actively showed themselves. For my part, I am ready to continue to take part in this project, as I clearly understand how important this knowledge is, because often in the field we are faced with the fact that the condition of the injured is aggravated by the fact that he was not provided with competent first aid," she shared.

The children, in turn, did not let Indira Amichba go, they asked her to try to bandage their arm, then their leg, to "provide first aid" on a mannequin. They especially liked this part of the training.

"We really enjoyed this lesson. Today we have learned something new and we are waiting for the training to be repeated again," said student Sofia Gunba. 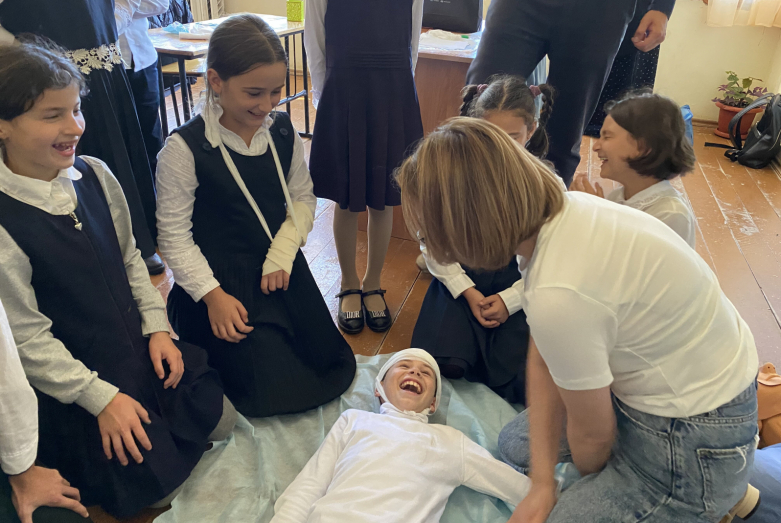 The employees of the WAC also showed films and cartoons in the Abkhaz language to the schoolchildren of the village of Abgarkhuk. The final stage of the day was a master class on the Abkhazian national games, which was held by the head of the Department of Youth Development and Physical Culture of the WAC Valery Berzenia.

"We are trying to revive national sports games, our project includes several games. Along with "aimtsakiachara", there are also such games as "akhilpahas", "akiabrou". Aimtsakiachara is a game similar to rugby. Warriors were brought up on such games, they helped to work out speed, agility, quick reflexes. Today, as part of the project, we want to introduce children to different sports that were previously popular in our culture," Berzenia said. 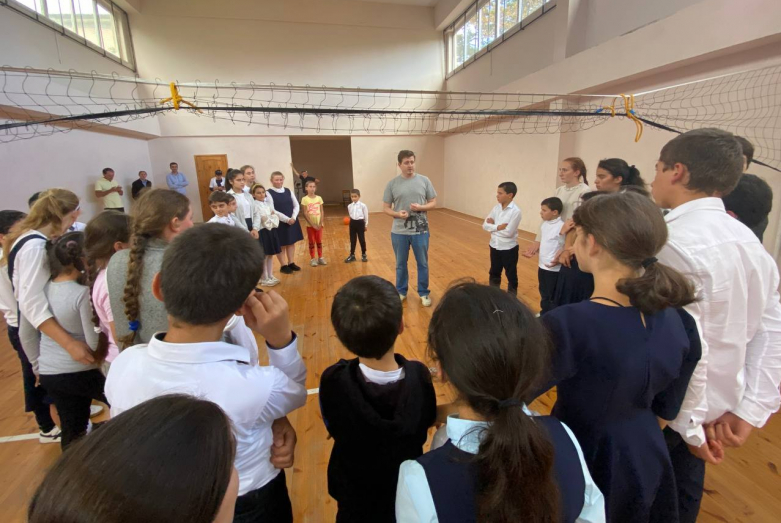 Principal of the Abgarkhuk School Vanda Adzhba thanked the staff of the Congress for the events.

"Today, our students received a lot of new knowledge as part of the first aid training. The children watched cartoons and films with great pleasure. Both boys and girls took part in the sports game equally. It is very important for us to be participants in events that are related to our culture. Many thanks to the WAC staff for the visit," she said.

Local branches of the World Abaza Congress are open in all regions of Abkhazia - from Gagra to Gal. They began to open in 2019, today the initiative residents are united in LBs in 42 settlements of Abkhazia.