The WAC project to revive the national sports games has ended in Abkhazia. It was attended by over 300 schoolchildren from eight villages - Mgudzirkhua, Chlou, Aradu, Mokva, Abgarkhuk, Tamysh, Duripsh and Dzhgerda. As part of the project, the team of the Sukhum office of the Congress, together with representatives of the local branches, conducted lectures on the history of folk sports, as well as master classes on the national games "Aimtsakachara" (Abkhazian folk ball game - ed.), "Akhylpahas" (in translation from the Abkhaz means "catching a hat" - ed.) and "Akybrou" (Abkhazian folk version of the game of pegs - ed.).

The WAC conducted classes on national games and showed cartoons for schoolchildren in the village of Tamysh.
© WAC
Tournament on Abkhazian folk games "Ахьышьҭра" was held in Sukhum with the support of the WAC
© WAC

Mussa Ekzekov, Chairman of the Supreme Council of the World Abaza Congress, noted the key role of the project for the revival of folk sports games in the preservation of national culture.

"Projects implemented by local branches of the Congress throughout Abkhazia are aimed at preserving and developing the national culture and traditions of the Abaza people. They are targeted primarily at young people, and are designed to instill in the younger generation a love for national sports and other traditional activities," said Ekzekov.

Tournament on Abkhazian folk games "Ахьышьҭра" was held in Sukhum with the support of the WAC
© WAC
A working trip of the coordinators of the Local branches of the WAC to the village of Chlou took place.
© WAC

Master classes on folk games were held for four months, from June to September. This time, the participants not only got acquainted with the Abkhazian national sport, but also fell in love with it. This was told by the Head of the Department of Youth Development and Physical Culture of the WAC, the head of the project for the revival of folk games Valery Berzenia.

"We were able to interest the youth. We not only told, but also showed them how to play "Aimtsakachara", they actively joined. Once the guys started playing, there was no chance to stop them," Berzenia shared.

Conducting master classes was preceded by serious work on collecting a theoretical base about games. The WAC team prepared a collection of rules for folk sports based on materials from a book on Abkhazian folk games, as well as stories from villagers.

Speaking about the importance of preserving and popularizing national sports, the head of the project for the revival of folk games, Valery Berzenia, noted their special value as artifacts of the Abkhazian traditional culture.

"Our main task is to preserve the Abkhazian culture, history and language. The project on the revival of interest in the Abkhazian folk games is aimed at introducing young people to sports and expanding the [positive] perception of Abkhazian culture. As part of the project, we want to introduce children to different sports that were popular in our culture: warriors were educated on such games, they helped to develop speed, agility, and rapid reflexes," said Berzenia.

More than 40 schoolchildren attended each master class. As part of the project, the WAC team also showed them a film: high school students were shown documentaries in the Abkhaz language from the "Amazara" project dedicated to the Abkhazian national culture, and junior students were shown Astamur Kvitsinia’s cartoon "Valors of Abraskil".

Dmitry Zhiba, head of the Department for Work with Local Branches, told about the success of cinema in the Abkhaz language among schoolchildren.

"We organized film screenings in six villages and every time the children were happy to meet us: they watched the movies with pleasure and actively participated in the discussion of the films shown. At the end they asked us to come back with "summer cinemas" again. The villagers even thought about how to organize such screenings on their own," Zhiba said. 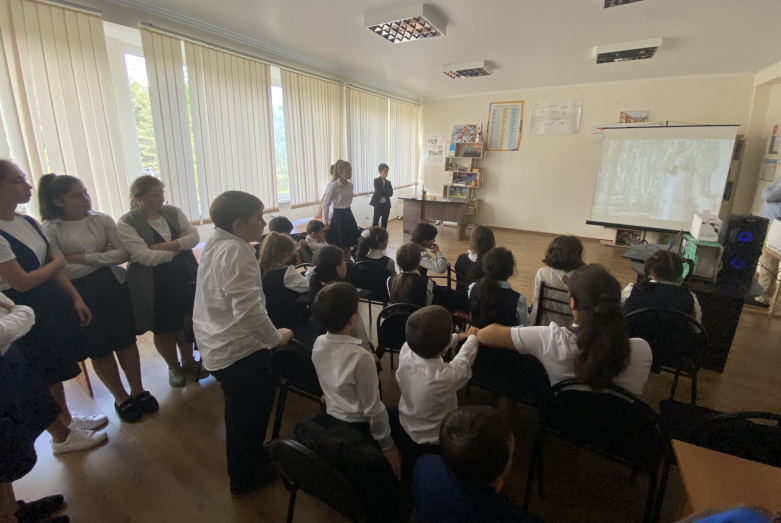 At the end of the project on the revival of folk sports, the "Akhyshtra" tournament was held, in which teams of schoolchildren from Duripsh, Dzhgerda, Chlou, as well as students of Sukhum Secondary School No. 1 took part. The participants of the competition demonstrated the skills gained during the master classes.

Summing up the results of the project, the WAC team noted the success of the mission to promote folk sports among young people and outlined plans for the further development of the Abkhazian national games.