To sound to the whole world: the "Amazara" project will be continued by Abkhazian folk music

The new "Amazara" project of the World Abaza Congress and ANO "Alashara" about the intangible heritage will be continued by the folk Abkhazian song "Нарҭаа рышҭыбжь" performed by the Khuntzaria Orchestra, shot on video.

The Abkhazian folk song " Нарҭаа рышҭыбжь" (translated from Abkhazian - "Echo of the Narts" - ed.) performed by the Otar Khuntzaria Orchestra of Folk Instruments popular in Abkhazia will continue the project of the WAC and "Alashara" about the intangible heritage of the Abkhaz-Abaza people. 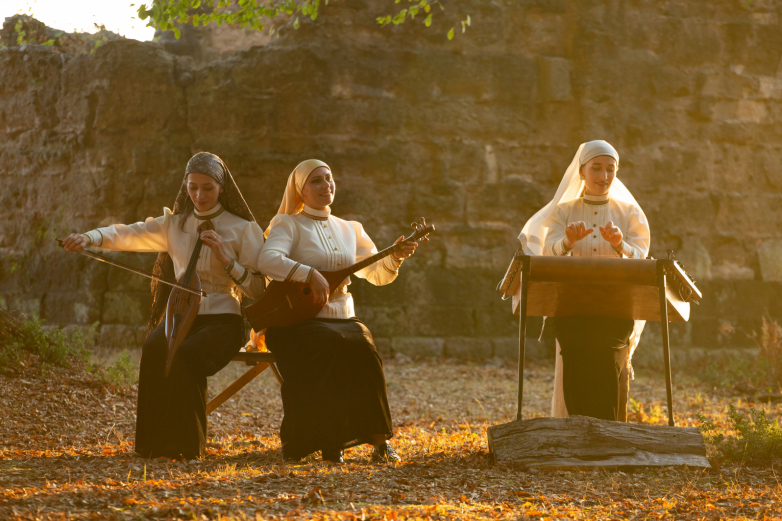 It is to be recalled that the author of the project called "Amazara" (translated from Abkhazian – value, treasure, treasury – ed.) was the Chairman of the Supreme Council of the Congress Mussa Ekzekov. The project consists of several parts-stages dedicated to the most significant phenomena in the culture of the Abkhaz-Abaza people. Each stage results in videos that are distributed through the information portal of the Congress and other online platforms. 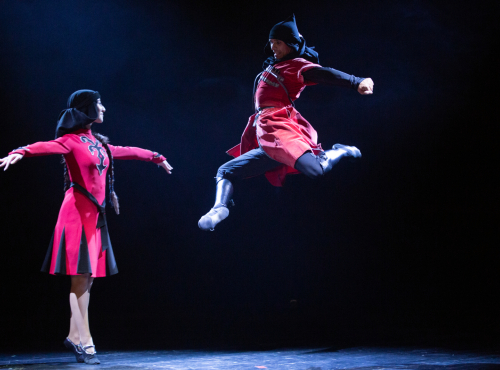 The head of the Women's Councils of the WAC, Geta Ardzinba, has been actively preparing videos from the first days. She believes that the "Amazara" project is unique in its essence and notes that such a large-scale project on the intangible heritage of the Abkhaz-Abaza people is being implemented for the first time.

Ardzinba told some details of the work of the WAC team on each video: first of all, it is necessary to attract high-class professionals.

"The task is to gather as many specialists as possible into a team which could present the video in the most interesting way, and it should be visually very beautiful. It is important that the presentation is special," explained the head of the Women's Councils and added that "all the guys agreed to make a video on Abkhazian music, without hesitation, for which many thanks to them".

THE VIDEO IS OUT ON NOVEMBER 16 ONLINE AND ON SOCIAL MEDIA.

For this work, the members of the Otar Khuntzaria Orchestra were sewn special blousons in the "Moda-tex" atelier in Sukhum.

"Everyone helps us a lot. The result is a powerful movement. Many professionals are involved in the project. They approach it with great love and responsibility. This will leave a real online trace of Abkhazia. We hope that viewers will appreciate it", concluded Geta Ardzinba.

The second video (the first has already been shot and is dedicated to folk dance - ed.) was directed by a young but already well-known Abkhazian filmmaker Daut Logua and his video production studio VERTIGO. He said that he had long wanted to make "something like that", and when he was asked by the Congress to take part in the "Amazara" project, he immediately agreed. 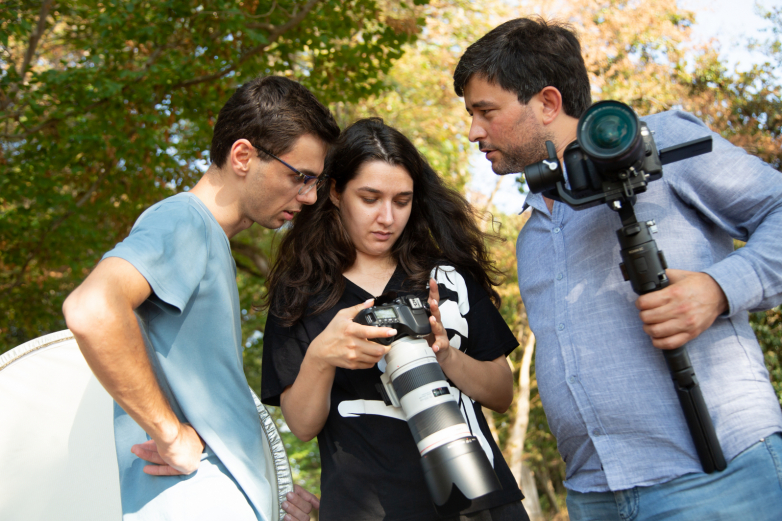 "My first request was: I want to shoot Abkhazian musical instruments. They said that there was an ensemble, and I agreed with pleasure, because I myself have been interested in filming music for a long time. It is colorful, it is beautiful and it can be served very "tasty". However, it is not even about "fashion", it is a part of us. In the video, we decided to show all the rich toolkit of the composition, while adding a small line about how the guys are going to play," the director said about his work.

Daut Logua did not immediately decide on the location for filming.

"The first place that came to my mind was the Upper Eshera, the peak of Awazaba, there is an old fortress tower and there is also an incredibly beautiful forest, just incredible. However, when we started working on logistics, we began to realize that it was not so convenient in terms of accessibility: as you can see, we were 20 people, tools, luggage, and so on. We started looking for a more accessible place. I was shown another location by the people who were here before us, and it so happened that our cameraman, Valera Kvekveskiri, also filmed here and said that this place is wonderful. We arrived here about a week ago, wandered, managed to look at this place from all sides - it is also very beautiful here and, of course, the frame is much richer when there is the sea. And we decided to stay here, because it is easy to get here, and at the same time we do not lose in beauty," said the director.

Cameraman Valery Kvekveskiri, founder of Alan Studio, recently launched his own project about the beauty of the Abkhazian mountains. His videos are available at the Infoportal of the World Abaza Congress as well. Kvekveskiri decided to become part of the "Amazara" project with great pleasure. 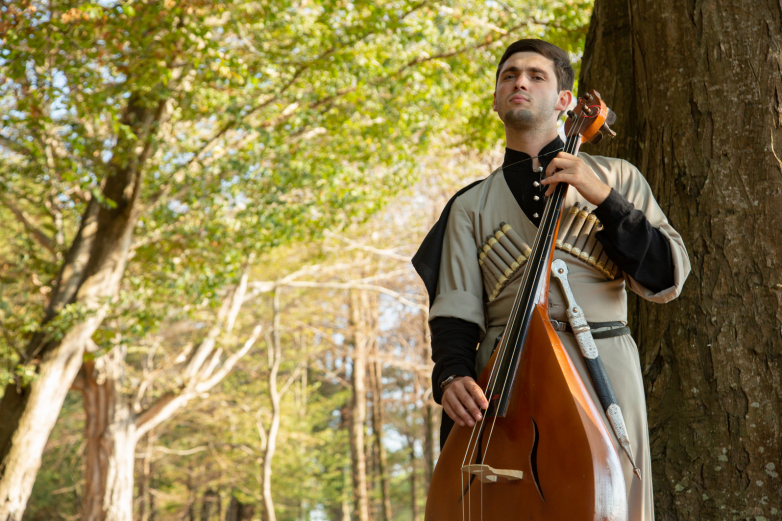 For many years, the Otar Khunzaria Orchestra of Folk Instruments, in particular, its leader, the young musician Denis Arukhaa has been promoting Abkhazian folk music. It is worth noting that the team has long won the audience's sympathy in Abkhazia and has performed outside the homeland more than once.

"In this project we play an Abkhazian folk song called "Нарҭаа рышҭыбжь", arranged by the composer Otar Khuntzaria. We chose it because it contains almost all of our Abkhazian instruments. This is traditional music, it sounds like it would have been played 70-80 years ago. This is its value. In general, the value of folk music is indescribable, because this is the music that our people have endured, one might say, brought to our days. And today we have the opportunity to further promote it, leaving it intact in terms of processing, to pass it on to the next generations, and this is the value," said Denis Arukhaa.

In the orchestra from the first days of its creation, Astan Bargandzhia and Marianna Arshba have been playing folk instruments. Both are in love with folk music since childhood and intend to devote their lives to it.

"From early childhood, I was a member of Denis Arukhaa's orchestra in the village of Khuap. I play the accordion, I love this instrument. Since then, we have come a long way, we continue to play, work, we try to promote Abkhazian folk music. As for the WAC project, I believe that such projects are very important. This is the first project of this kind in my professional activity," Astan shared. 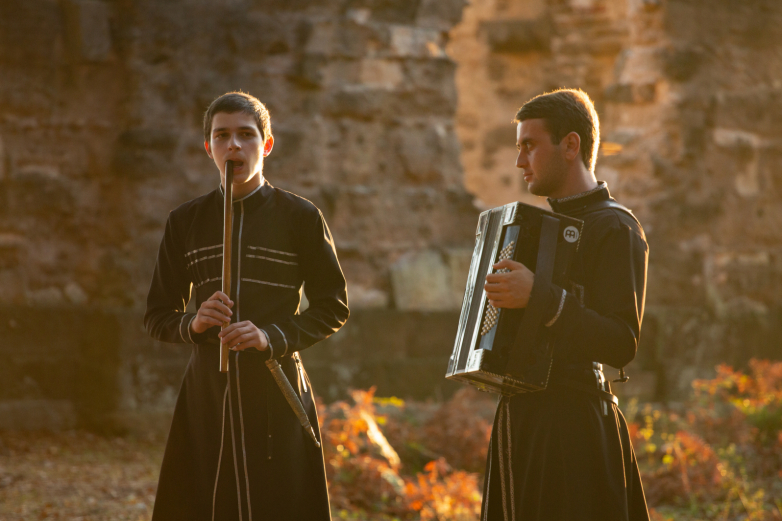 "Nowadays there are very few people who play national musical instruments, but from my very childhood I loved to play folklore instruments. The organizers of this project made a very right decision. I think, thanks to this, it will be possible to tell the world about our distinctive culture," said the musician.

The Congress team would like to thank everyone who supports the project. The WAC intends to continue inviting various specialists in relevant fields to participate in the shooting process.

The "Amazara" project on the intangible heritage of the Abkhaz-Abaza people of the World Abaza Congress and the international association "Alashara" will be continued by videos on national literature and language, folk crafts and ancient traditions. The videos will be filmed gradually in Abkhazia and in Karachay-Cherkessia.