Abkhaz finds and international congresses of the archaeologist Ece Trapsh

An Abkhaz from Turkey, archaeologist Ece Trapsh, has been living in her historical homeland for 11 years. Today she excavates in her native village, finding valuable archaeological material there, and also helps Abkhaz scholars to speak at international congresses.

Archaeologist Gül Ece Trapsh, an Abkhaz from Turkey, today lives in her historical homeland and works for her welfare in her profession.  And for the first time she ended up in Abkhazia 11 years ago.  A graduate of the Department of Classical Archeology at Ankara University, then she came to Sukhum at the invitation of Abkhaz scholars. 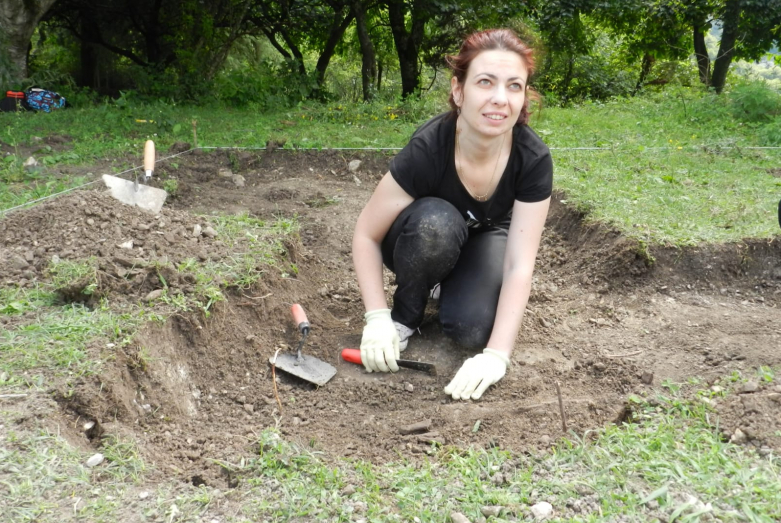 “My family was exiled to Anatolia (Anatolia is another name for Asia Minor, today Turkey’s Asian possessions are often called Anatolia - ed.),” says Ece.  “The father’s family [ended up] in Sinop. In Abkhazia, before exile, they lived in the village of Anhua.  The mother's family settled in the Turkish city of Bilecik.  Before eviction from Abkhazia, they lived in Tsebelda, their village is Abzhakua.”

Ece herself was born and raised in Ankara, brought up mainly by her grandmother, who told her a lot about Abkhaz customs and culture.

In 2008, a group of Abkhaz scholars visited Ankara. 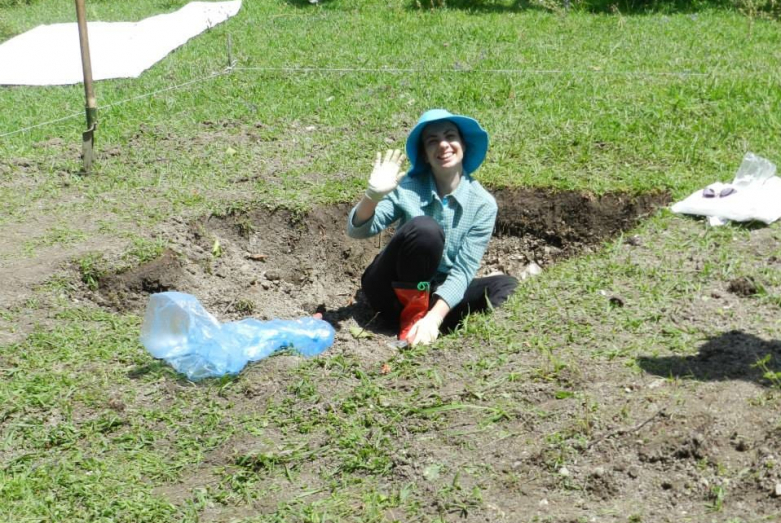 “They were very interested in what I was doing in archeology, they began to invite me to work in Abkhazia,” recalls Ece.  “The first to tell me this was the historian Guram Gunba.”

Inspired by that meeting and the opportunity to see the homeland of her ancestors, Ece finally decided to go to Abkhazia.  The fact that her mother, Liman Chokua, has always been a very active person in the Abkhaz Diaspora of Turkey also played a role in this decision.  It was no coincidence that Ece first came to Abkhazia during the celebration of the 90th anniversary of the first professional Abkhaz archaeologist Mikhail Trapsh.  Ece herself still evaluates all this as some “signs” that told her that it was worth not only to come home, but also to “stay forever”.

During her very first ten-day visit to Abkhazia, Ece Trapsh stayed in Novy Afon.  Later, for a long time, she lived with journalist Inna Khadzhimba.

Meanwhile, the journalist and archaeologist saw each other for the first time only in Abkhazia, in Sukhum.

This first meeting, which took place at the “Inter-Sukhum” Hotel, was described by Inna Khadzhimba as follows: “I don’t know why, but I noticed Ece.  Such a little “emerald” ... It was evident that she was private, with a very strict look.”

And then they met, and this private, strict girl began to live with Khadzhimba - just as at home, as in her family. 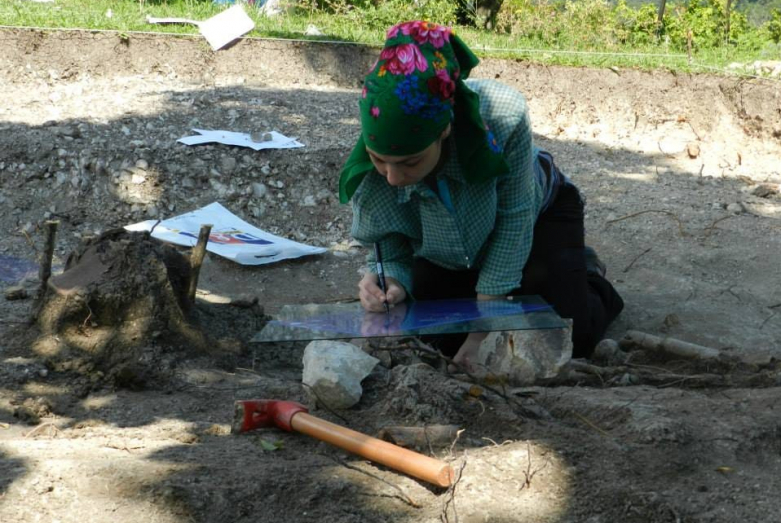 Ece was very motivated.  First of all, in Abkhazia, she learned Abkhaz language, it took about a year.  As a teacher, Nonna Thuazba worked with the girl, but the family also played a huge role; they daily spoke only their native language.

“I told her: if you learn Russian first, you will never learn Abkhaz,” Inna Khadzhimba recalls, “and she did so: she sat down as children sit down with books, studied, taught, and from scratch, without any basis, managed to master Abkhaz, and speaks it today without accent.”

On her first archaeological site in Abkhazia, Ece Trapsh went to the village of Otkhara.  The excavations were led by the famous Abkhaz scholar Igor Tsvinaria.  Also, the archaeologist took part in an expedition in the village of Eshera and in Sukhum. 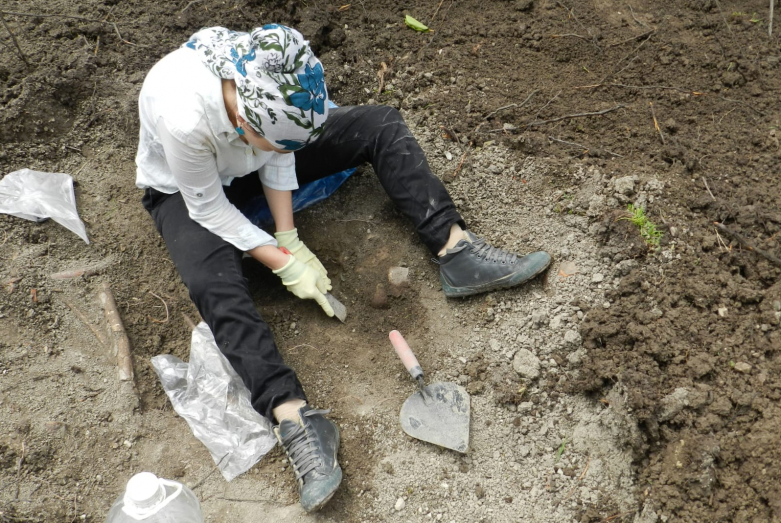 In 2013, Ece Trapsh worked as the head of an archaeological expedition in the historical homeland of her ancestors in the village of Anhua, where previously no large-scale archaeological excavations were carried out.  There she managed to find three ancient burial grounds with an age of 1,500 years.

“One of these cemeteries was, so to speak, in a “proper” state: all the remains were intact.  There I found two spears, one sword, two brooches (a metal clasp or pin that serves as a decoration - ed.). We believe that they were all made from local material.  We also concluded that the materials that we found in these cemeteries are very close to the Tsebelda culture (late-antique and early medieval archaeological culture on the territory of Tsebelda in Abkhazia - ed.).  All this needs to be explored much deeper, as it is clear that if there are burial grounds, it means that somewhere there was also housing for people,” the archaeologist notes.

During excavations in the village of Anhua, the archaeologist worked for four years.  The valuable material found there is now partially located in the ABIGI (Abkhaz Institute for Humanitarian Studies named after D.I. Gulia - ed.), and all the finds from iron are in the Abkhaz State Museum. 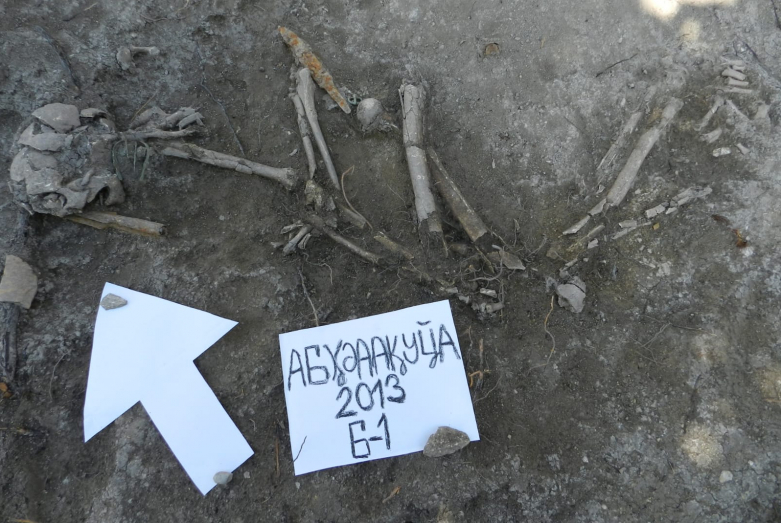 Ece has now stopped excavations, as she is studying in Turkey at the Gazi University in Ankara.  She is preparing a work on the archeology of Abkhazia and the Black Sea region.

“Little bridge” to the international community

Ece continues to be an employee of the Department of Archeology at the Abkhaz Institute for Humanitarian Studies, and also works at the State Museum of the Patriotic War of the people of Abkhazia in Gudauta. 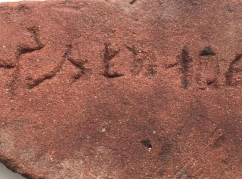 Ancient plate with inscriptions in Aramaic discovered in Abkhazia

The archaeologist writes all her scientific articles in the Abkhaz language.  However, Ece’s Turkish language was very useful for compatriots: for three years she taught it at the Department of International Relations of the Abkhaz State University.

The fact that Ece Trapsh was born and raised in Turkey, is fluent in the Turkish and, at the same time, is seriously engaged in science, has learned Abkhaz and Russian - gives serious reasons to believe that she can become a “little bridge” for Abkhaz scholars to the international community of archaeologists.  Thanks to Ece, the work of Abkhaz scholars was brilliantly translated into Turkish and presented at international congresses of archeology held in Izmir in 2010, in Manisa in 2011, as well as in the Azerbaijani city of Agsu in 2012.

“When Ece speaks Abkhaz, she is restrained, quiet.  And it’s a completely different thing when he speaks Turkish, - Inna Khazhimba is surprised.  “She's so powerful and emotional.”

The journalist says that when Ece Trapsh read the reports of Abkhaz historians in Turkish, all Turkish scholars “were so impressed that they were extremely interested in the topic and their Abkhaz colleagues.” 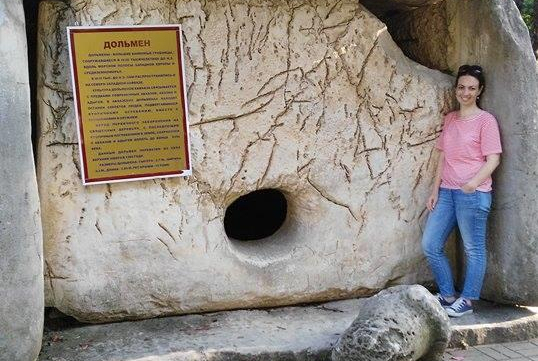 Ece Trapsh near the Eshera dolmen in the courtyard of the Abkhaz State Museum, Sukhum
© From the archive of Ece Trapsh

The observation of restraint in communication in Abkhaz is not unfounded.  Many of those who know Ece closely note that in behavior and attitudes she is a traditional Abkhaz, although at the same time very modern. She is wearing modern clothes and jewelry, not chasing the external manifestations of traditions, she strictly complies with internal norms of behavior, clearly delineates what is due and what cannot be done, often has a very mature vision, evaluating any situation with almost male logic.

Ece’s future plans and thoughts are mostly about science.  She is constantly worried about the archeology of her native Abkhazia, and it’s very important for her not to lose touch with her homeland, which she found 11 years ago.

Communicating with her and learning about her from others, one can say with almost one hundred percent certainty: wherever the young scientist Ece Trapsh remains in the future, in Abkhazia or Turkey, she will be an Abkhaz archaeologist, and all her research will lead to the land of ancestors.