The cartoon "Valors of Abraskil" was translated from Abkhaz into English by the WAC information portal.

The cartoon "Valors of Abraskil", created in 2020 by the Abkhazian singer, artist and cartoonist Astamur Kvitsinia, was translated into English by the World Abaza Congress. Today both the author himself and the team that worked on the translation are sure that the audience of the cartoon will become significantly wider.

How Abraskil "spoke" in English

All dialogues in the cartoon were translated from Abkhaz into English by the editor-in-chief of the WAC information portal Amina Lazba.

Since it turned out to be important for the Congress to make high-quality translation and dubbing, a so-called native stylist was also involved in the work on the film. The Englishman Kalli Singh has been living in Sukhum for four years and is conducting tutoring. He got involved in the project. 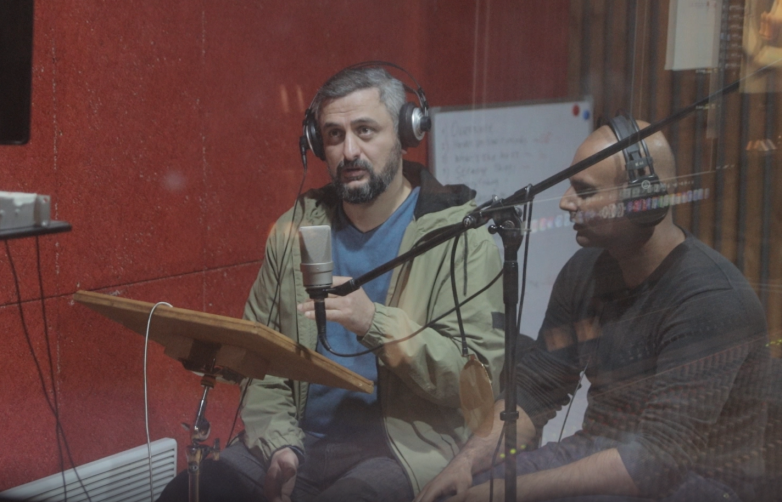 According to Amina Lazba, she encountered some difficulties while translating related to interjections. Here the help of the Englishman was most welcome.

"Direct translation of interjections from Abkhaz into English did not work. It is like with an Abkhazian joke, which, despite it seems, you can translate it into Russian, loses the whole range of emotions. I had to explain these emotions to Kalli in English, under what circumstances a person experiences them, so that he could find the appropriate equivalent in English. We discussed and analyzed the emotional color of each such exclamation. We found words that were very close in meaning," the editor-in-chief of the information portal shared the nuances of working on the translation.

She added that it was also a difficult task to translate the song, due to the certain rhythm laid down in the original language.

Lazba said that the producer of the cartoon, Mzauch Pilia, originally had an idea to translate the film into Italian, but since Italian is not available on the information portal, the WAC offered to translate it into English.

"Many well-known English-speaking characters already "speak" Abkhazian - Batman, Spider-Man and others. We decided to make the Abkhazian hero Abraskil speak English. This is a step towards popularization of the Abkhazian character outside the Republic. In addition, many representatives of our foreign Diaspora speak English, and it will be interesting for them to watch the cartoon," says Amina Lazba.

She noted that everyone who voiced the cartoon, helped with translation and recording in the studio, did it free of charge.

"Everyone was enthusiastic about the idea of ​​dubbing the Abkhazian cartoon in English, so they gladly agreed to become involved in the project," said the editor-in-chief of the WAC information portal. 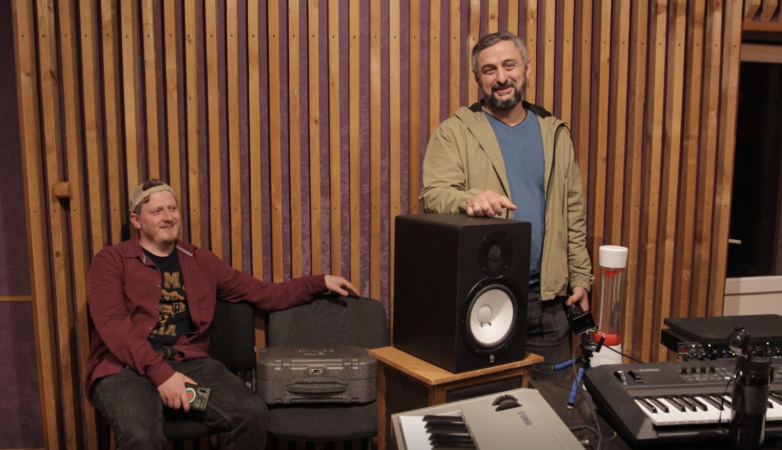 The author of "Valors of Abraskil" Astamur Kvitsinia called the fact of the translation of the Abkhazian cartoon into English joyful and at the same time unusual.

"We usually translate cartoons from English into Abkhaz. Today our product has been translated into a popular international language of communication, thanks to which the audience of the film will expand significantly," Kvitsinia believes.

He expressed gratitude to the initiators of dubbing, the World Abaza Congress, for the interest that the organization showed in his work.

"The WAC addressed me and the sponsor of the film, Mzauch Pilia, with a proposal to dub the animation. Of course, we agreed. The number of views of the cartoon (in Abkhaz - ed.) on my YouTube channel are fine, but only Abkhaz and Russian speakers can understand what the cartoon is about, there are subtitles in Russian. Now the cartoon will be available to our large Diaspora abroad and not just to them. This is important, because through cartoons you can understand the culture of other peoples," Kvitsinia is confident.

New voices of the cartoon

The same dubbing actors voiced some of the cartoon characters as in the Abkhazian version. So, the audience will hear in both versions the voices of Erik Mikaya as Adauy ("giant" in the Abkhaz language - ed.) and the author Astamur Kvitsinia in a cameo role of Bat. New voice actors - Valery Berzenia, Alan Dzhonua, Kalli Singh and Daut Logua, voiced most of the English text.

Alan Dzhonua is a very young participant in the project; one might even say the smallest. He is 6 years old; he voiced the son of Adauy. The boy has an impeccable British pronunciation: he has been speaking English since the age of three and has been studying with Kalli Singh. According to his father, Damey Dzhonua, Alan learned the language just while watching cartoons in English.

"Alan has been studying English since the age of three. I watched cartoons in English. The choice of cartoons in the Abkhaz, unfortunately, was not very big, he watched everything," the father of the young polyglot shared.

The dubbing recording was made in the studio of the composer and musician Anri Gumba. Kalli Singh helped with the pronunciation and intonation of English words. He himself voiced the main character - Abraskil, who has the most lyrics in the film. 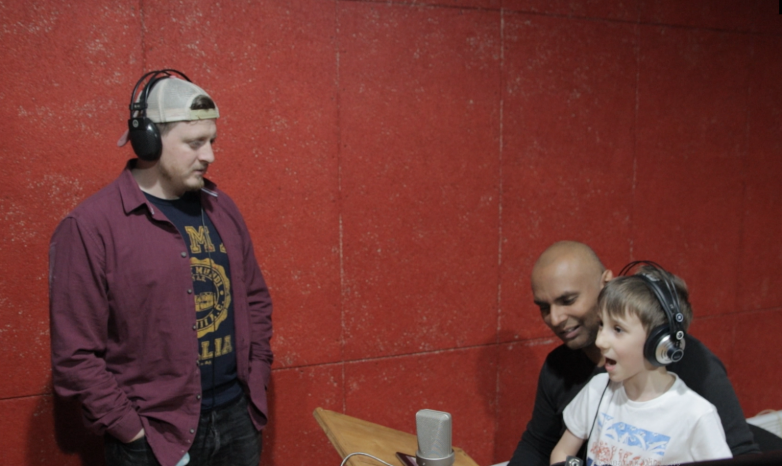 "I liked how all the guys worked - professionally and talentedly. I did not expect that so many people know English. The sounds in Abkhazian and English are similar, so no one had any problems with pronunciation," Singh assured.

It is worth noting that he himself has an excellent pronunciation of Abkhazian words. Living in Abkhazia, he began to study the Abkhaz language by himself.

"I thought that learning the Abkhaz language would be difficult. But little by little I learned the words, and now I can say what I want," the Englishman said in Abkhaz and continued the phrase in Russian: "At the same time I learn Russian, so sometimes I mix up the words of Abkhaz and Russian. Here, many, if not the majority, speak Russian, so it is necessary to know it in Abkhazia."

Singer Narsou Abukhba performed the song in the original cartoon. In the English version, he sings the same song, but in English. 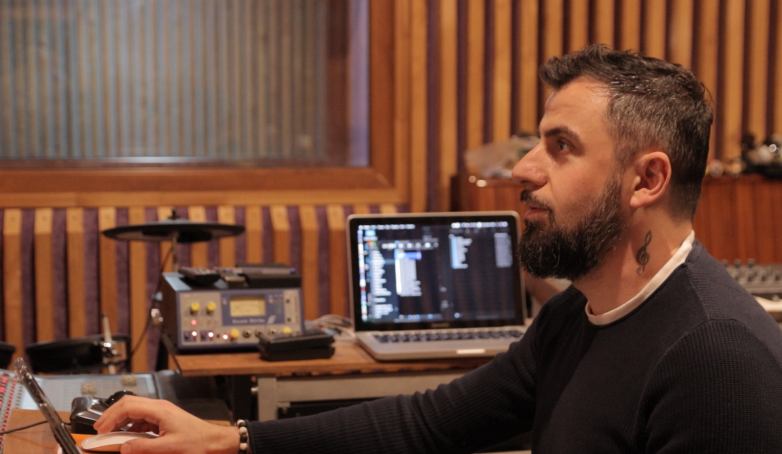 "I studied English at school and university, but when a person does not live in an English-speaking environment or does not study the language by occupation, there can certainly be flaws in pronunciation. Therefore, when recording, Kalli's help was invaluable," said Abukhba.

The role of the dubbing actor was played by an employee of the WAC - the coordinator of the local branches of the WAC and youth activity Valery Berzenia. He voiced the Abraskil’s horse - Bzou.

"Most of our Diaspora living outside the Republic does not know the Abkhaz and Russian languages. That is why a translation was needed so that the Abkhazian cartoon was understandable to them. We tried to record English with the Abkhazian spirit," Berzenia said with a smile.

Musician Erik Mikaya voices Adauy in the Abkhazian and English versions of the cartoon. He called the project "responsible and exciting": the original Abkhazian cartoon is translated into English for the English-speaking audience, so that they "can watch exactly the Abkhazian fairy tale in a language that they understand." The musician is sure that it is necessary to set a special goal - to create films based on national legends and myths.

"My grandparents got me hooked on Abkhaz fairy tales since I was a little kid. They were not even repeated when they were told to me in the evening before going to bed, because there are so many of them. These fairy tales can and should be filmed. It would be no less interesting than Harry Potter and everything that children are now excited about. Astamur Kvitsinia was working almost on just enthusiasm, on his own. He has been dealing with this business for a very long time. I hope that in the near future his other projects will also find support in the person of patrons," Mikaya wished. 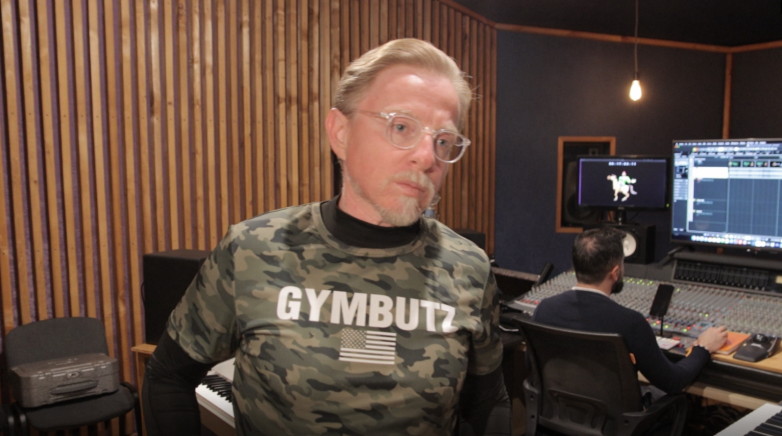 Astamur Kvitsinia has been dealing with the subject of Abkhazian legends for a long time. At first, he published comics. The first comic by Astamur Kvitsiniya about Abraskil was released in 2009. Then the Fund for the Development of the Abkhaz Language provided support in its publication. The comic won the attention of readers and became popular, after which Kvitsinia released a second comic, also based on the Abkhazian legend "Napkha Kiagua" (national Abkhazian hero - ed.).

Astamur Kvitsinia continues to work on creating new comics. The script for the cartoon "Кэтаг,ьцэахылп,а" ("Hat from the shell") is already at the final stage. He wrote the continuation of "Valors of Abraskil", in the second part, according to him, there is a romantic element: Abraskil saves the girl. 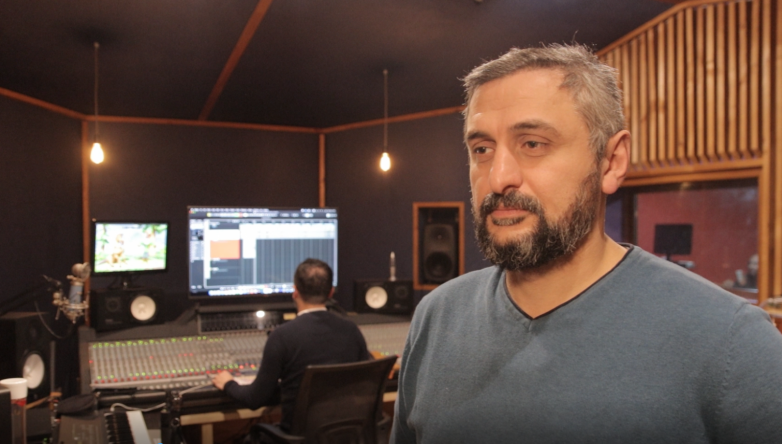 The premiere of the cartoon "Valors of Abraskil" was held on August 27, 2020 in Sukhum at the Abkhazian State Philharmonic named after R. Gumba. The animator took as a basis a plot from Abkhazian mythology. The protagonist of this story, Abraskil, is an invincible and proud hero. He was born to become a defender of his people from strangers; he grew up to be a strong and hardy person. Having obtained for himself the horse Arash, Abraskil began to fulfill his destiny. According to legend, over time, he began to resist not only enemies, but also the gods, for which he was punished by them and weakened. The enemies of Abraskil took advantage of this, chaining the hero and his horse in a cave.