Colleagues and wards of Shugaib Khabatov, a talented breeder and manager, appreciated his caring attitude towards both people and animals. One of his main achievements was the breeding of a new fine-wool sheep breed, for which he received a high award - the Stalin Prize.

Shugaib Khabatov was born on January 3, 1897 in the Kumsk-Loo village (now the village of Krasny Vostok - ed.).  From a young age, he found himself in a whirlwind of revolutionary changes taking place in the country.  During the Civil War, in 1921, he was a conductor of the Chongar Division of the First Mounted Army of Budyonny.

He received his first education in 1922-1924 at the Soviet-party school, which was organized in the village of Batalpashinsk (now the city of Cherkessk - ed.). For his whole life he remained grateful to his older brother Abdulkadyr, who had been supplying him with food for all these two years, delivering it to him from the village to the regional center.

In 1924, Shugaib Khabatov was sent to study in Moscow, at the Communist University of the East Workers named after Stalin.  Two years later he was sent to the Karachay-Cherkess Autonomous Region, where he worked as chairman of the village council of the Kumsk-Loo village.  Later he worked in the district police in the city of Kislovodsk, from 1932 to 1935 - deputy head of the Land Administration of the Karachay Autonomous Region.

In 1935-1938, Shugaib Khabatov studied at the Timiryazev Academy of Socialist Agriculture, graduated with honors from the zootechnical faculty and was sent as a director to the “Sovetskoe Runo” sheep farm of Ipatovsky district, Stavropol Region. 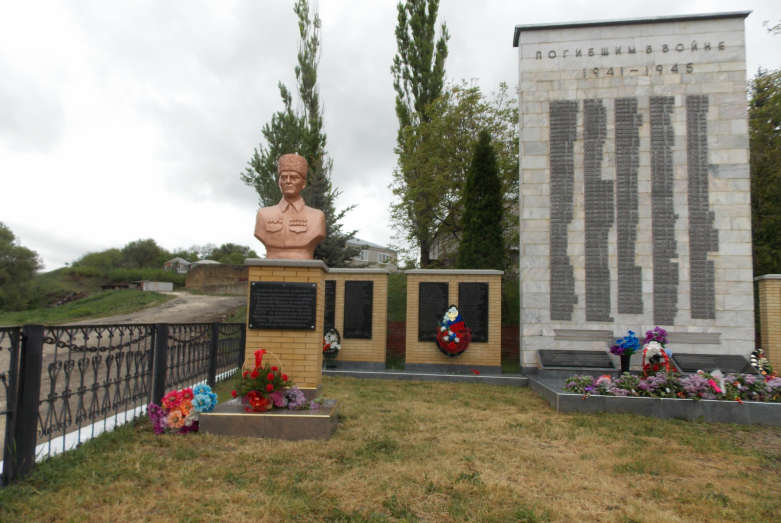 Since 1924, they tried to establish breeding work at the sheep farm, but for decades nothing good came of it: the economy was in decline.  In 1936-1937, appraisal of sheep and selection and breeding work were practically not carried out.  On top of that, the sheep stock was infected with tuberculosis and scabies, and there was a large mortality of sheep.

The new director accepted the economy in such conditions.

From the first days, Shugaib Khabatov began to put things in order: he picked up the best workers who knew sheep breeding, and staffed shepherd brigades with them, created good working and living conditions for them.  He managed to strengthen the feed base and prepare sound premises for the sheep population.  Scabies and tuberculosis were eradicated in a short time.

The new leader was distinguished by a caring attitude not only to people, but to everything living. 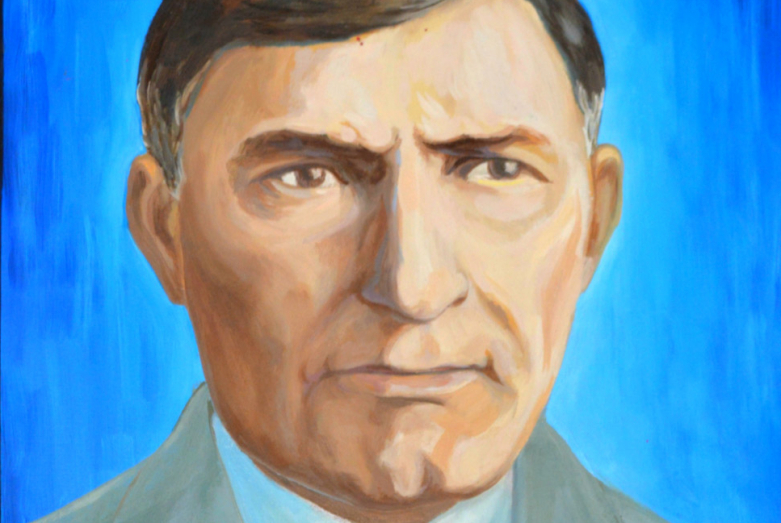 In the village of Sovetskoe Runo, such an incident is still being told.  Once, shepherds arrived on bulls to get grain and, as usual, went into the store to drink.  They threw hay to the bulls, but did not straighten them.  When the bull leaned towards the hay, the yoke fell on its neck and disturbed the animal.  At this time, Shugaib Naibovich went to the office and saw the tormented animals. He walked over, pulled out splinters to free the bulls from the yoke.  Someone from the young assistants of the shepherd, who did not know Khabatov in person, when leaving the store, noticed a man doing something at their carts and attacked him with a curse.  And the man responsed in a specific Russian:

- Why is your bull yoke neck pushing?!

The director was strict with negligent employees.  And if the villagers heard the phrase “My dear!” pronounced with a characteristic accent, everyone understood that Shugaib Naibovich had already been angered, and he climbed into the holster to pick up his Mauser, which he always carried with him.  Of course, it never came to shooting.  But he always managed to threaten.

As they say, with the help of a carrot and stick, Shugaib Khabatov turned the unprofitable sheep farm into an advanced economy. 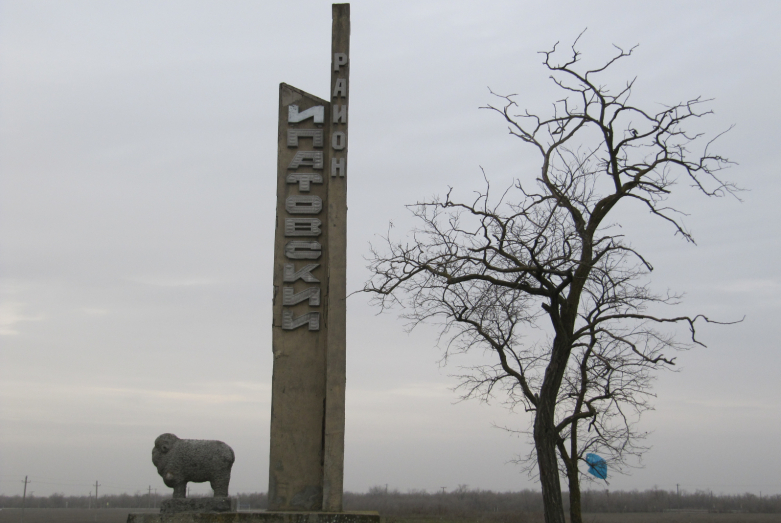 Stele at the entrance to the Ipatovsky district, Stavropol Region
© ANO “Alashara”

The confident gait of the labor collective was interrupted by the war.  In July 1942, when German troops had already approached Stavropol, the task was to evacuate the state farm, but the way was cut off by the Nazis.  Shugaib Khabatov with the staff of the farm joined the partisan detachment named after Peter, where he became intelligence commander.  After the invaders were expelled, in April 1943, by the decision of the Stavropol Regional Party Committee, he was recalled from the partisan detachment and sent to restore the “Sovruno” state farm.  This task was successfully completed, and in 1945, Shugaib Khabatov was awarded the medal “For Labor Valor”.  His military path did not go unnoticed either: he was awarded the medals “Partisans of the Patriotic War” (1943) and “For the Defense of the Caucasus” (1944).

In 1948, Khabatov was awarded the Order of Lenin for high achievements in the development of animal husbandry, and in 1951 he was awarded the Stalin Prize for breeding a new fine-fleeced sheep breed.  In his memoirs, Shugaib Naibovich himself later wrote that the collective farm staff managed to do this because deep selection work was carried out, both female and male animals, with the most developed qualities of the desired breed, were carefully selected for breeding.

Here is a significant fact: over the years of work of Shugaib Naibovich, the director of “Sovruno” state farm, eleven of his employees were awarded the title Hero of Socialist Labor. 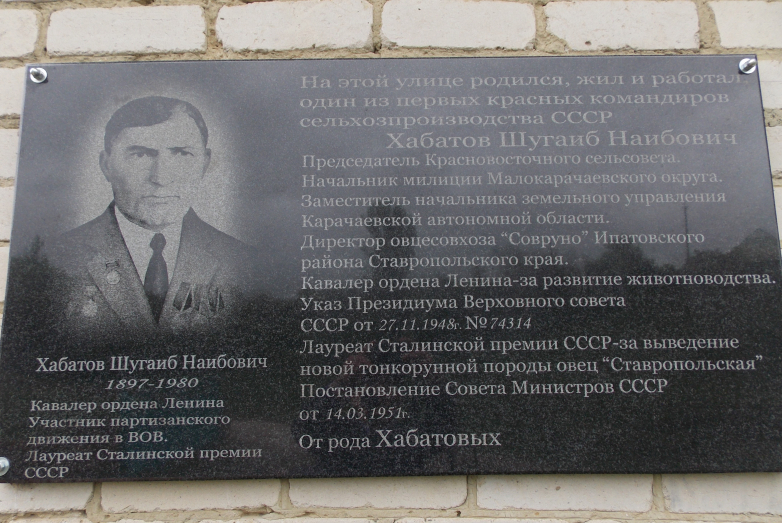 In 1952, Khabatov was sent to restore the “Kabardinsky” pedigree farm, and in 1957 he headed the newly formed state farm “Mahmud-Mektebsky” of the Kayachulinsk district of the Stavropol Region, where he worked until 1959.

He spent the last years of his life in Pyatigorsk, was an honorary citizen of this city.

In the resort town, not only Shugaib Naibovich himself was famous, but also all members of his family, each of whom achieved certain successes in their own fields.

His wife, Nurjan Magometovna, worked as a paramedic of the Pyatigorsk Children's Clinic, she was awarded the medals “For Valiant Labor in the Great Patriotic War against German Fascism” and “For Labor Valor”. 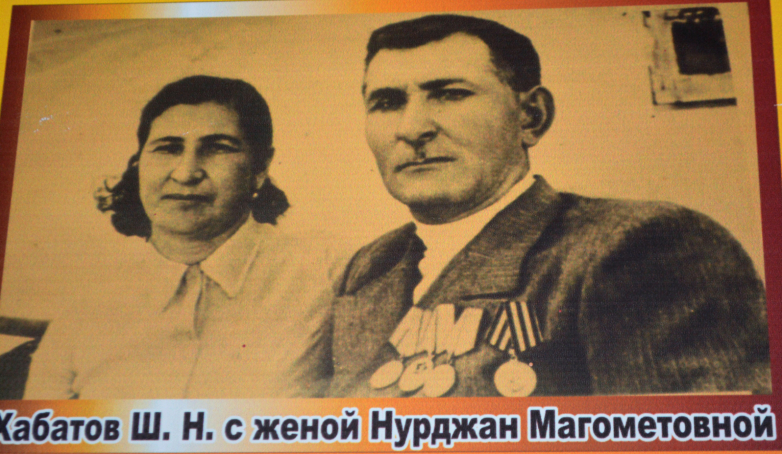 The eldest daughter Elvira taught chemistry at Pyatigorsk Secondary School No. 9 and was awarded the jubilee medal “For Valiant Labor to Commemorate the Centenary of the Birth of V.I. Lenin.” The second daughter Muza also had an award - “Excellent Healthcare Worker.”  She was a pharmacist.

Sons have proved themselves in science and in leadership positions.  Ruslan - Doctor of Technical Sciences, professor, author of more than 300 scientific papers.  For more than 30 years, he headed the department of the K.A. Timiryazev Moscow Agricultural Academy.  He was an Honored Worker of Science and Technology of the Russian Federation.  Boris, Candidate of Technical Sciences, worked as the General Director of the Pyatigorsk Agricultural Machinery Plant of the USSR Ministry of Secondary Engineering, and the Director of the Moscow Scientific Research Institute of Agricultural Engineering.

Today, none of them are already with us, but people still remember them with a kind word.  A documentary story in Abaza was written about Shugaib Naibovich Khabatov - the first work of this genre in national literature - “When the Stozhars Wake Up” (“ЙачIваджьыргIа ргIашIыхамта”). It was published in Cherkessk in 1989.  In 2017, the public of Karachay-Cherkessia widely celebrated his 120th anniversary.  And on May 9, 2018, a bust and a memorial plaque were installed in Shugaib Khabatov's native village of Krasny Vostok.