Tall guard of time: the story of the building of the Administration of Sukhum

The building of the Capital Administration was built in 1914: it turned 105 years old. Who built this house, which became the hallmark of Sukhum, how it changed, and what remained unchanged in it – all this is featured in the material of the WAC portal.

The tower clock building in the very center of Sukhum on the corner of Leon and Ayaayra Avenues is one of the most recognizable sights of the capital of Abkhazia. In 2019, it turned 105 years old. Over it’s more than a century of history, this house has more than once witnessed crucial events in the life of the town and has absorbed the spirit of various times. 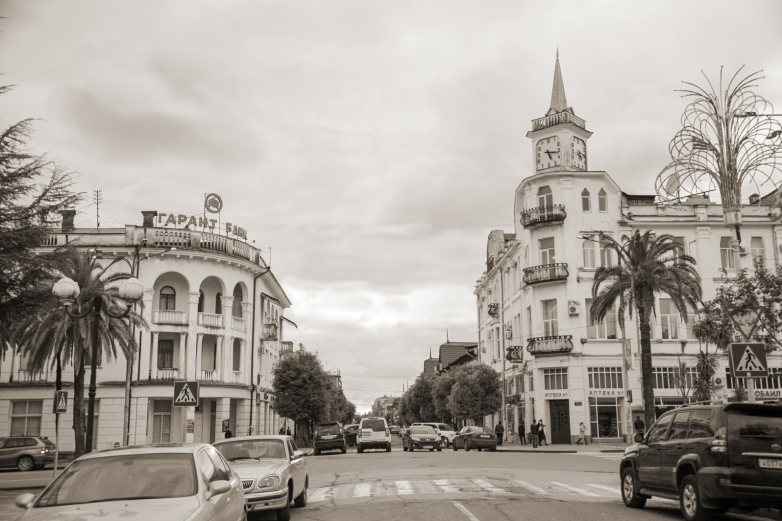 Sukhum at the beginning of the 20th century

The modern architectural appearance of the Abkhaz capital began to take shape at the turn of the 19th and 20th centuries. Therefore, talking about any of the famous ancient buildings in the town, we are mentally transported one hundred years ago and plunge into the atmosphere of the last century.

Sukhum at the beginning of the 20th century was a small multinational town. About eight thousand people of more than 20 nationalities lived here: Abkhaz, Russians, Greeks, Armenians, Turks, Megrelians and many others. Each ethnic group had its own society and helped representatives of its group. They built churches, opened schools and helped their representatives run for the City Duma.

At that time, we learn about the structure of urban life, first of all, from the “Descriptive guide to the town of Sukhum”, published by the local historian and enlightener Konstantin Machavariani in 1913, as well as from the works of the historian Anzor Agumaa, who described the history of more than a hundred buildings of Sukhum - urban development objects .

Thanks to them, we know, for example, that at the beginning of the 20th century mail was already operating in Sukhum. The number of mailboxes in the town in 1912 reached 14, correspondence was taken out twice a day: at 11 a.m. and at 5 p.m. Some postmen and delivery men delivered mail on bicycles. Letters and telegrams addressed to the townspeople were delivered to the house by postmen. The correspondence intended to be sent from Sukhum was delivered by citizens to the postal and telegraph office.

There is another very interesting fact regarding the connection: an Indo-European telegraph ran through Abkhazia and Sukhum, connecting London and Calcutta (during the British rule, Calcutta was the capital of all of British India until 1911 - ed.). The cast-iron pillars of the “Siemens Brothers” joint-stock company (London) and “Siemens and Gaalske” (Berlin), along which the telegraph line was stretched, can still be found in Abkhazia today.

The town’s authorities were represented by the City Council, headed by the mayor - and the already mentioned City Duma. The first elections to the Sukhum Duma took place in 1899. Deputies were elected for four years. In the first elections, 163 citizens who had the right to vote took part (only those who owned real estate valued at least 500 rubles, as well as merchants of the 1st and 2nd guilds - ed.) were included in the list. The composition of the first convocation of the City Duma included 6 nobles, 5 retired military officers, 5 civil servants, 2 doctors and 1 architect-artist, 5 petty bourgeois and 2 peasants (petty bourgeois and peasants were representatives of the commercial population of the town - ed.).

At the beginning of the last century, two theaters operated in Sukhum. There were many brick factories, and, of course, there were consumer services: shops, hairdressers, cafes, restaurants and photo workshops.

Sukhum was a center of attraction for doctors from all over the Russian Empire. The local climate made it possible to consider the town one of the best places for treating pulmonary patients. It is because of this that the most modern hospitals and sanatoriums appeared at that time.

However, balneology (a section of medical science that studies the properties of mineral waters, methods of their use for therapeutic and prophylactic purposes - ed.) is not the only reason why in the late XIX - early XX centuries the small town of Abkhazia turned into the Black Sea Riviera, where many entrepreneurs worked and lived, where representatives of the Russian intelligentsia built cottages and came to rest.

Konstantin Machavariani in his guide to Sukhum writes: “Visitors often ask the question: “What does the praised Sukhum gives everywhere? What can it boast about before other cities? ” And in the Ministry and even in the City Council, when discussing the issue of the Black Sea Railway, such things were heard: “The Black Sea coast gives fruits and flowers. Is it possible to spend tens of millions on the construction of the railway in order to export only fruits and flowers?”

Machavariani also gives an answer to these questions: the thing is high-quality tobacco, which was produced in Abkhazia and exported from here in very large quantities.

“The manufacturers, their commissioners and agents earn a huge amount of money and build their own palaces and chambers,” we read in the “guidebook”.

The amount of tobacco produced in Abkhazia was, without exaggeration, huge. Therefore, in 1914, tobacco collection in Abkhazia reached one million pounds, the writer Isaac Babel notes in one of his articles.

“The former monopoly suppliers of tobacco - Macedonia, Turkey, Egypt - could not help but recognize the incomparable qualities of the new competitor. The finest varieties produced by the famous factories of Cairo, Alexandria, London, acquired special value from a mixture of Abkhaz tobacco. With lightning speed, our product has gained a reputation as one of the best in the world, foreign capital rushed rapidly along the coast and set about building huge warehouses and breaking down industrial plantations,” Babel writes.

Understanding the role of the tobacco industry, which was once the foundation of Sukhum's economy, is important for understanding how the city was shaped and developed. After all, if you know all these circumstances, it is not surprising that the tobacco magnate Stefan Stefanidi built the massive building that appeared in 1914 at the intersection of the then Kolyubyakinskaya and Georgievskaya streets (today Leon Avenue and Ayaayra Avenue - ed.).

Stefanidi was from among the Pontic Greeks who, at the turn of the 19th and 20th centuries, came to Abkhazia from Asia Minor. The Greeks made a huge contribution to the development of Sukhum. An example is exactly Stefan Stefanidi, who, having made a fortune on the sale of tobacco left the buildings as a legacy to the town, which were included in the list of the main architectural attractions of the town.

Stefanidi himself lived at that time with his family in a five-story building, which for a long time was considered the highest in Sukhum. This mansion was built in 1912 at the intersection of Vorontsovo-Dashkovskaya and Georgievskaya Streets (today Abazinskaya Street and Ayaayra Avenue - ed.). On the ground floor of his house were shops and a private pharmacy, and above were the owners themselves and the apartments that they rented out.

Later, in 1921, the house of Stefanidi will become the property of the town, and the family of the Greek rich man will soon leave Abkhazia. His house will survive to this day: today it is an apartment building and a monument of the historical and architectural heritage of Abkhazia.

The new four-story mansion (the current building of the metropolitan administration - ed.) was designed by Veniamin Ostrovidov. The building was built in the Art Nouveau style typical of Sukhum. At the beginning of the twentieth century, it was perceived as a kind of “skyscraper” of that time.

Some sources indicate that the owner ordered his initials to be engraved on the sidewalk in front of the building. Now you cannot find the initials, maybe they were lost during the next laying out of a new tile.

Stefanidi sold the mansion on the corner of Kolyubyakinskaya and Georgievskaya shortly after construction to another tobacco entrepreneur, the owner of the “Mir” tobacco company Gokyelov, and since then the office of this enterprise has been located in a beautiful building. 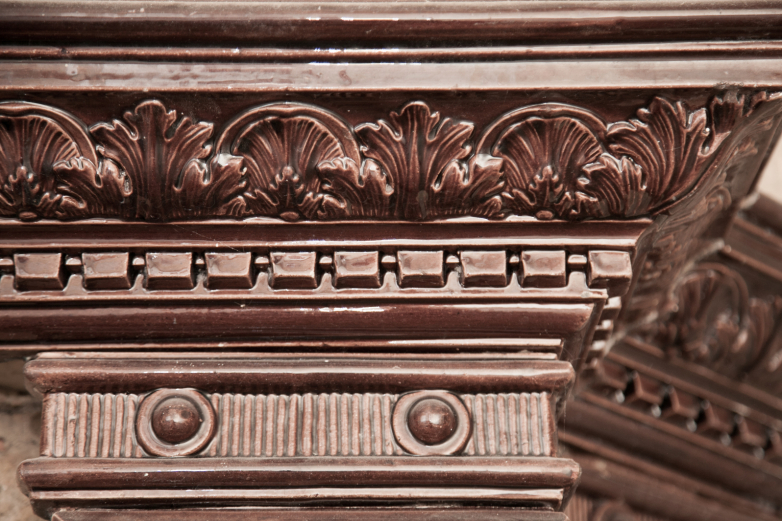 105 years ago, there were also many private institutions in this building: the pharmacy of pharmacist Bauman, the fashion and haberdashery store “Lyonsky Chic”, the book and stationery store of Gogidzhanova. Surprisingly, a century later there is also a pharmacy, a clothing store, a bookstore and a stationery.

The project of the building, as well as postcards depicting the building of the beginning and the middle of the last century, have survived to this day and are well known to Sukhum residents. However, there was almost no information left about how its interior looked. 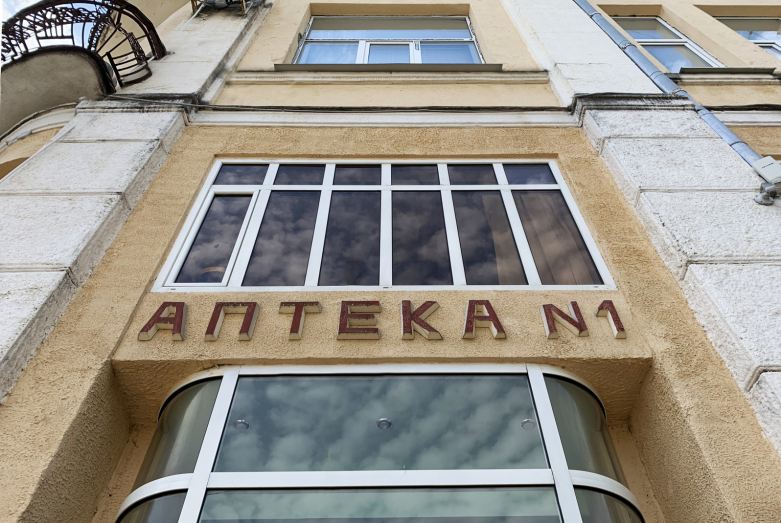 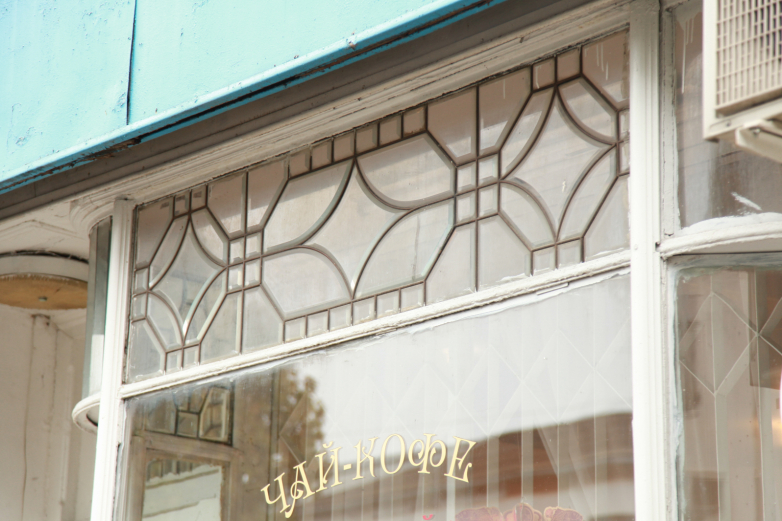 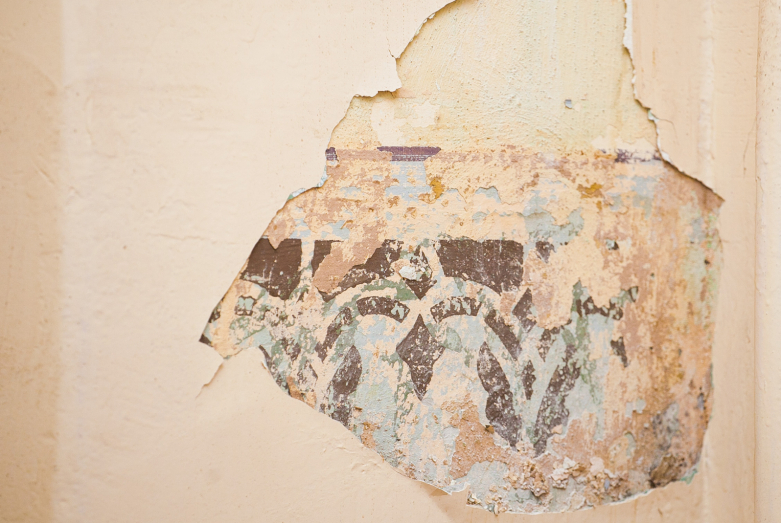 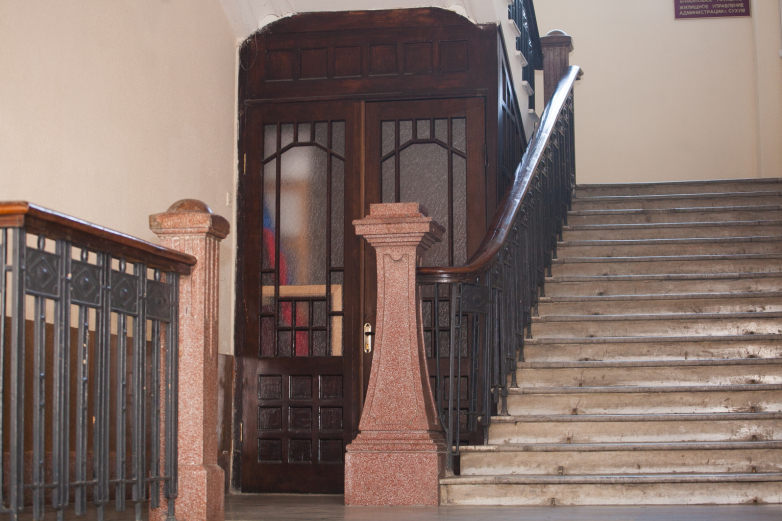 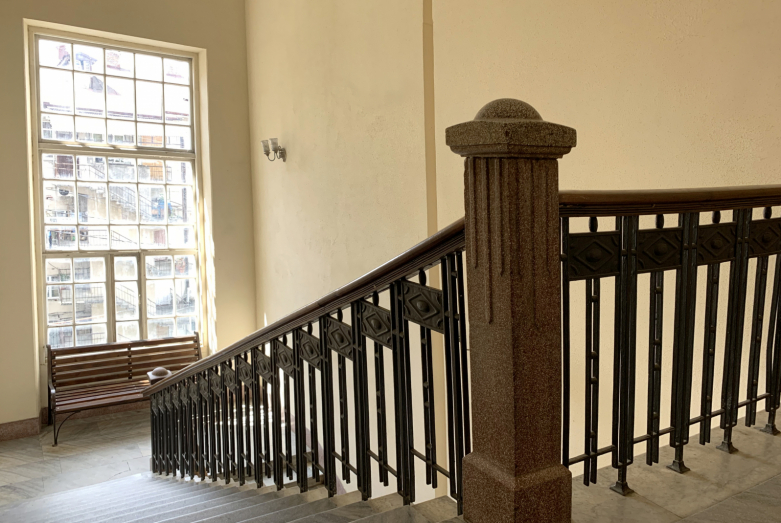 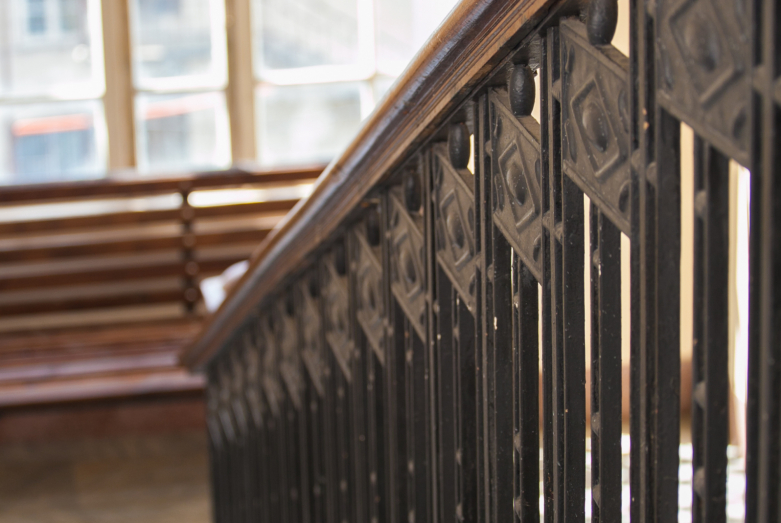 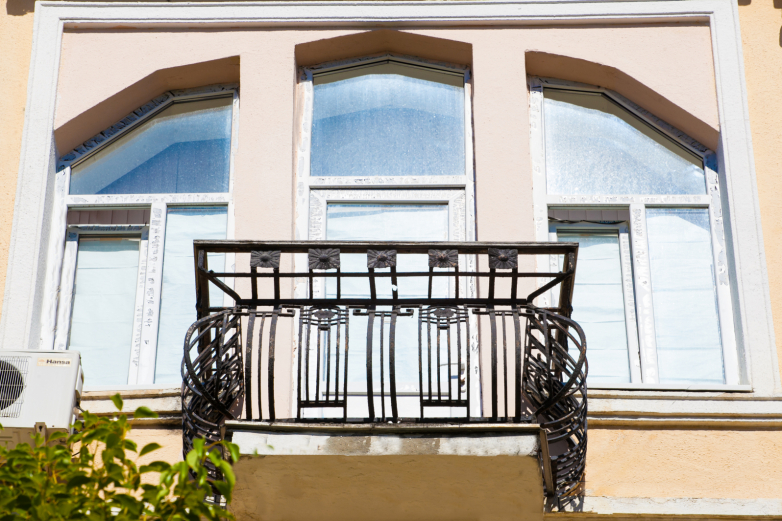 Building of the City Administration of Sukhum
© WAC / Naala Avidzba 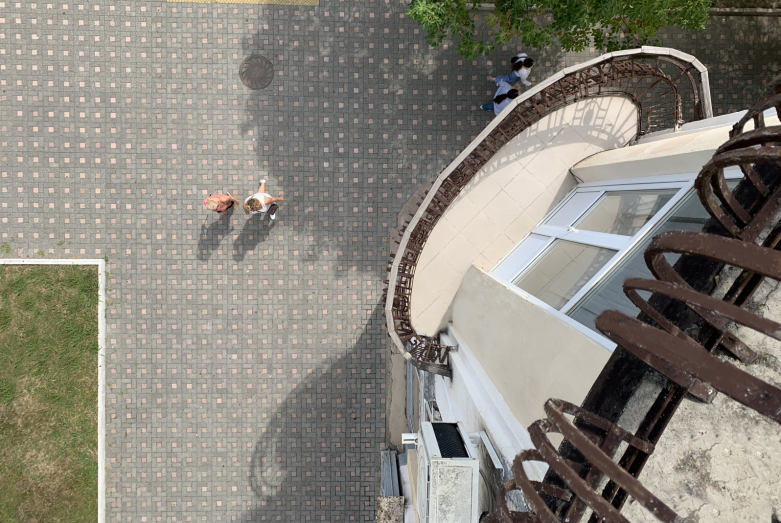 Building of the City Administration of Sukhum
© WAC / Naala Avidzba

After the advent of Soviet power in 1921, the four-story building in the very center of the Abkhaz capital was municipalized, the Labor Palace was located here. Then it was transferred to the City Council of Workers (City Council). A huge poster appeared on the facade of a tall building with a full-length image of Joseph Stalin. Communist slogans were engraved on the walls.

Stefanidi's mansion in the Soviet period
© Anzor Agumaa’s Archive
The labor palace in the Stefanidi mansion after the establishment of Soviet power in Abkhazia
© abhazia-stranadushi.ru

The changes brought with them the new names of ancient streets - in the spirit of the times. So, Georgievskaya Street, on which the building was located, was also renamed many times.

At first, from 1880, it bore its name in honor of the younger brother of Emperor Alexander ΙΙΙ - His Grace Prince George Alexandrovich. In 1918, with the arrival of the Georgian Mensheviks in Abkhazia, it was renamed into Chkhenkeli Street - by the name of the Chairman of the Government of the Transcaucasian Federal Democratic Republic. And with the advent of Soviet power, the former Georgievskaya becomes a street named after the Third International. 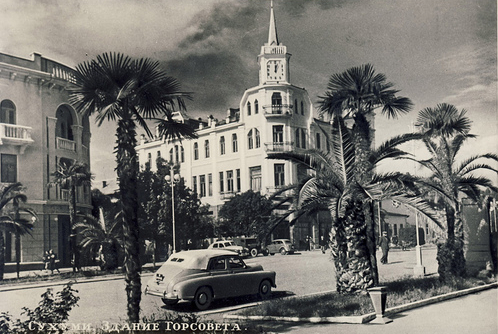 Later, in 1937, this longest street in the central part of the town was named after Joseph Stalin. In addition, after debunking of the Stalin personality cult in the early 1960s, the street received a new name - Prospekt Mira. Today it is Ayaayra Avenue, which is translated from Abkhaz as “Victory”.

If we recall that in the royal family the children were given the names of saints, and George is the name of the Saint Victorious (great martyr George the Victorious - ed.), then it turns out that Georgievskaya again received the “victorious” name, although it was different.

In 1950, Sukhum, as the cleanest town in the USSR, was presented with a city clock-chime. The gift was given to Abkhazia by the Moscow City Council - the highest state authority in Moscow from 1917 to 1993, the predecessor of the current Moscow City Duma. The clock was hoisted over the building of the Sukhum City Council. The tower clock has become a landmark of the capital and one of its most recognizable symbols.

Today, already in the 21st century, in the historical building of the then City Council the Administration of the town of Sukhum and the City Assembly are located and the “Ashana” Cultural and Charitable Foundation is operating. The Administration building, built in 1914, is included in the register of historical and cultural heritage of Abkhazia and is protected by the state, having long established itself as Abkhazia’s most recognizable feature.

Abraskil spoke in English: WAC translated the Abkhazian cartoon
The Museum of Anthropology and Ethnography released a collection "Caucasus: Crossroads of Cultures"
All publications