The book "Abkhazia: deportation of Abkhaz (XIX century)" was presented in Sukhum

A new book about the history of the forced resettlement of Abkhaz from Abkhazia in the 19th century, written by Teymuraz Achugba, was presented in Sukhum on Thursday 6 December.

Talking about the publication, the author immediately explained why he did not use the term "makhadzhirstvo" (forced exile). In the political, military, and scientific literature, to refer to the mass exodus of the mountain peoples of the Caucasus to the Ottoman Empire in the 19th century, this term, by contrast, was used. Often, it was identified with the concept of "hajj", that is, the "pilgrimage" of Muslims to places that they worshiped as saints. The dissemination of information that Caucasians had gone "for the hajj" suited those who were interested in resettling the indigenous peoples of the Caucasus, and those who accepted them, in order to alleviate the fate of the survivors and remove the blame from the organizers and perpetrators of this tragedy, believes the scientist.

Teymuraz Achugba also mentioned the misinterpretation of the term itself because of the combination of two Arabic words into one. He explained that we are talking about the words "mukhaadzher" and "mukhadzher."

"The first one means voluntary leave, and the other one is forced exile. Thus, there is a terminological confusion," said the scientist.

Based on these arguments, the author used the concept of "deportation" in the book and its title. This is exactly how the mass exodus of the Abkhaz population in the XIX century was qualified by the Parliament of the Republic of Abkhazia in a resolution of October 15, 1997, Achugba recalled.

In his speech, Teymuraz Achugba paid special attention to the repatriation of compatriots whose ancestors were resettled from their native lands in the 19th century. The scientist is sure that the return of the descendants of the Abkhaz deportees today is not just a humanitarian action that satisfies the desire of people to live in the homeland of their ancestors.

Doctor of Historical Sciences Valery Biguaa, who also spoke at the presentation, evaluated the publication as "dictated by time".

"Historical truth emerges in the book to its full height. Achugba enriched the golden fund of Abkhaz historiography, revealed all the visible and invisible brackets of those events. He told about what actually happened to our ancestors in those dark times," said Biguaa.

Candidate of Historical Sciences Soslan Salakaya, speaking at the presentation, noted that this is a "landmark work" in which the events of the deportation of the Abkhaz in the XIX century are described in the most detailed and documented way. 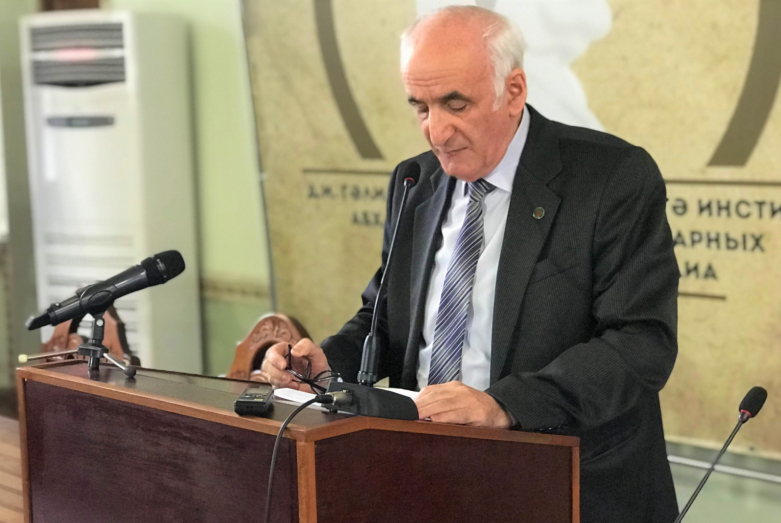 The book of the doctor of historical sciences Teymuraz Achugba "Abkhazia: deportation of Abkhaz (XIX century)" was presented in Sukhum
© WAC

Many speakers at the presentation expressed the wish to translate the book into the Abkhaz language (today it is written and published only in Russian - ed.). Then compatriots living outside Abkhazia and knowing their native language will be able to read it.

The book of Doctor of Historical Sciences Teimuraz Achugba "Abkhazia: deportation of Abkhaz (XIX century)" was released in a limited edition of 500 pieces. It is designed for historians, ethnologists, political scientists, a wide circle of readers interested in the history and culture of the Abkhaz people.