The short film "The Lamb" based on the story of the people's writer of Abkhazia Alexey Gogua was filmed by a young director Amina Kvarchia.

Student of the directing department of the All-Russian State Institute of Cinematography named after S.A. Gerasimov (VGIK) Amina Kvarchia made a short film based on the story "The Lamb" of the people's writer of Abkhazia Alexey Gogua.

It all started with a passion for the work of the Abkhazian prose writer, Amina Kvarchia shares. Some time ago, she discovered the unique language of the writer. The story "The Lamb" made a special impression on her, and she chose it for her thesis.

"The idea of ​​growing up resonated with me, how a little boy suddenly becomes an adult, how through loss he comes to realize the fragility of the world and the responsibility for making a decision. I had several options for scripts for my thesis, but the masters singled out the story of a boy with a lamb from all of them," recalls the girl.

The director specifically received approval for the film adaptation of the work from the author of the story, and she wrote the script herself. According to her, in order to meet the running time of student films, she had to choose only one storyline.

"There is a line in the story with his father, who went to the front, and the boy often sees him in his dreams. I have been thinking this over a lot whether to leave it or not: I was very impressed with this part of the story, but there were fears that it would not be possible to fully reveal it within the time limit. So I left the main storyline with the boy and the lamb," says Kvarchia.

Filming took place in the villages of Dzhgerda and Aimara, Ochamchira district. It took several weeks to find locations. Together with her assistant Fatima Dgebia, the director traveled to different villages in Abkhazia. According to her, the right space for filming was of particular importance to her. 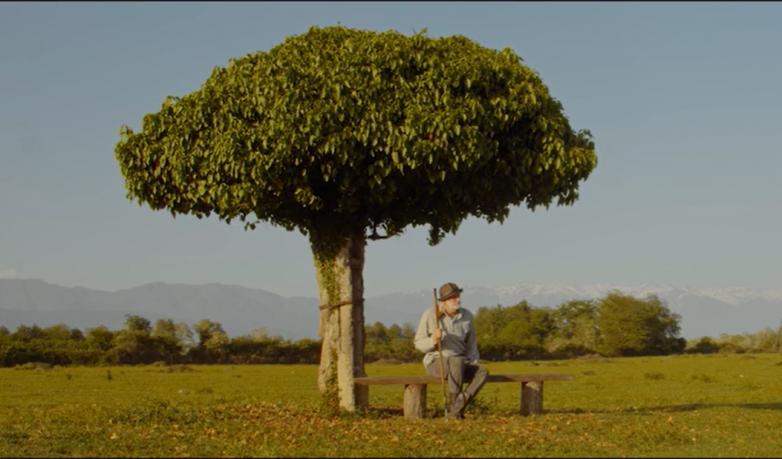 "In the village of Dzhgerda, we found a picturesque glade for scenes with a lamb. In the same glade, I liked the tree, ideal for a scene in which an elderly villager shares with the main character the story of how he planted a tree with his son. I found the main character's house in the same village. For the scene of plowing the field, it was necessary to find a plow pulled by oxen. There were certain difficulties associated with this, since such a traditional method is rarely used. Still I managed to find everything necessary for the scene in the village of Aimara. It was difficult to get there with the equipment and the film crew, but the shots were worth it," says Amina Kvarchia.

The director invited a real Abkhazian priest in the film. Amina says that he himself suggested the right decision for the scenes with his participation.

"Boris Kutelia did not have to play, since he is a real priest and has been conducting rituals for many years. Initially, I saw the sacrifice scene differently, but he told me the rules for the ceremony. I decided to keep the authenticity and follow his instructions," notes Kvarchia.

A student from the village of Chlou, Ochamchira district, ten-year-old Danat Cholokua played the main role of the boy. The director selected him from many applicants.

"It was important for me to find a main character who would look organic in this story. Therefore, I decided that a boy from the provinces should play the main role. I went to rural schools, but did not find him. Many people have heard that the casting for the film is underway, and they sent me a photo of Danat Cholokua. Then I realized that he is the one I was looking for. He went through the audition and I found out that I was right. The rest of the children who participated in the film also had no filming experience, but their interest and dedication compensated for this," says Amina Kvarchia. 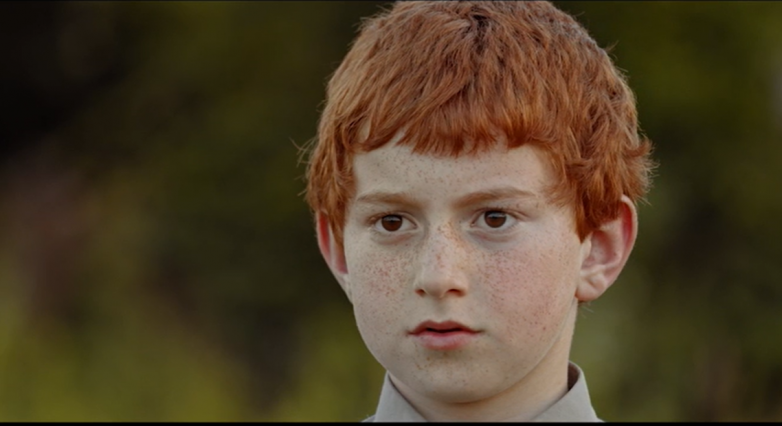 Move into a fairy tale

Actors of the Abkhazian Drama Theater Syrbey Sangulia and Lavrik Akhba also played in the film. Amina was assisted with the casting of professional actors by the head of the theater's public relations and media department Sharida Tuzhba. It so happened that the director herself offered to play one of the leading roles.

Tuzhba recalls how, in the process of searching for candidates, she jokingly offered her candidacy for the role of the mother of the protagonist ... to which she received a real offer to act in the movie.

"The director needed an actress who looked like the main character - blonde or red. To my surprise, Amina took my words seriously, and, of course, I could not refuse such an offer, I realized my old dream! I think every girl dreams of acting in a movie, no matter if it’s a short film or a feature film," says Sharida Tuzhba.

She shares her memories of how the "unforgettable magical shooting days" that took place in the picturesque Abkhazian village of Dzhgerda, "moved her into a fairy tale." As for the chance to appear in the same frame with senior colleagues, she considers this a great success.

"My scenes were directly with Syrbey Sangulia - he is a People's Artist of Abkhazia, my colleague in the theater, whom I respect very much, and it is a great honor for me to play with him, to be in the same frame, to stand next to him. I have already seen the edited film and I liked it very much. When we were shooting the movie, I imagined it exactly as it turned out - colorful, with birds singing, with magnificent landscapes of Abkhazian villages, with colorful people, and, of course, the history itself, so deep", Sharida Tuzhba talks about her debut.

She believes that the young director Amina Kvarchia is "the hope of the Abkhazian cinema."

"Amina is smart. Such a young specialist, a graduate of a serious VGIK university, is our pride. She was lucky that she had the opportunity to make a film based on Alexey Gogua’s story", concludes Sharida Tuzhba. 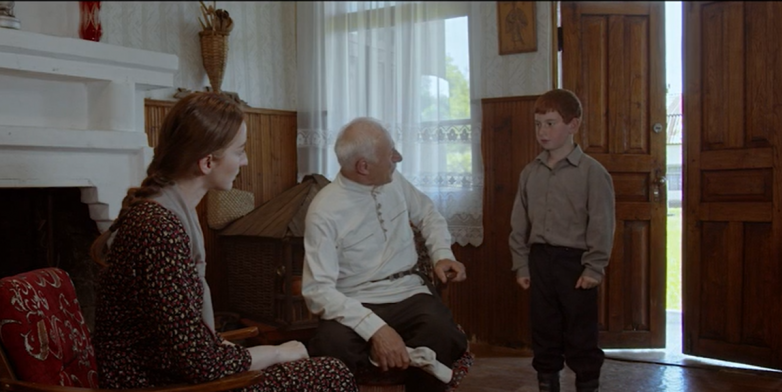 Changeable weather and a bratty lamb

As for financing, the film was shot at the expense of the graduate's family budget, there was no outside sponsorship. Amina Kvarchia's thesis was filmed in May 2021; the shooting went on for five days. Beslan Dzhinzholia was the director of photography, Said Ayba worked on the light in the frame, musician Anri Gumba worked on the sound, colorist Denis Anishchenko worked on the color correction. The soundtrack is the Adyg performer Azmetuko and CHAPSH.

Kvarchia herself cut the movie. She explained that she wanted to "assemble the story on her own" after having all the material in her hands - the result of huge teamwork. 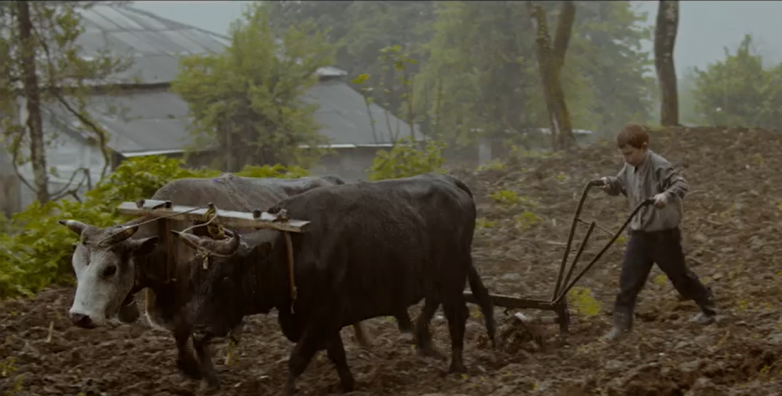 "Cinema is made by people, and I was happy to walk this path with such a team. I am grateful to everyone who worked on the film and helped with its implementation," the director thanked.

Recalling her work on set, she says that she generally does not like to experiment on the go and always follows a pre-written director's script. However, during the filming of the "The Lamb", changeable weather in the highlands made adjustments to the work. In addition, when there are not only actors on the set, but also an animal that should "play", this complicates the process.

"The presence on camera of an untrained animal greatly complicated the filming process. On the first day of filming, the lamb ran away. The whole film crew tried to catch it; we spent a lot of time and effort. We had to deviate a little from the original storyboards and shoot a lot of takes, as the lamb behaved bratty," says Amina Kvarchia.

Director of a film for the audience

She entered the directing department at the Moscow Institute of Television and Radio Broadcasting Ostankino in 2014, studied at the workshop of Vladimir Khotinenko and Sebastian Alarcon. In 2018, she moved to VGIK, to the workshop of Andrey Eshpay and Vladimir Fenchenko.

In her student years, Amina made four short films, three of them in Abkhazia. In the near future, the girl plans to try her hand at making music videos and commercials and then make her debut feature film.

The director has not yet presented the "The Lamb" to the public: she travels to festivals.

"Festivals are an excellent platform for short films; it is an opportunity to show films to the audience in different countries of the world. Nevertheless, I did not set myself the task of conforming to the format of the festivals. The movie was shot for the audience, and I wanted [namely] them not to remain indifferent," notes Amina Kvarchia.

She also showed "The Lamb" to the author of the story in the first place. Alexey Gogua approved the film.

"I liked the movie. When a work becomes a movie, a second life is breathed into it, it is revealed in many ways. Thanks a lot!" the people's writer thanked the young director.

The film became a finalist in the "Best Short Film" nomination in Italy, at the Rome Prisma Film Awards.

The WAC web information portal will translate the film into five languages and upload to the www.abaza.org with subtitles.

“To be an inextinguishable flame of the people”: on the birthday of writer Alexey Gogua
Alexey Gogua: with thoughts about Abkhazia