WAC, Abkhazfed and Kaffed summed up the results of working meetings in Turkey

WAC, Abkhazfed and Kaffed summarized the results of the Congress delegation’s visit to the Republic of Turkey.

The participants of the meetings during the visit of the WAC delegation to Turkey said that the joint work with the Congress was fruitful, and the decisions and plans at the end of the visit effective. 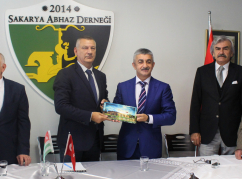 It is to be recalled that the working visit of the leadership of the WAC began on 21, and ended on 25 October. The schedule of the delegation consisted of meetings with the heads of Diaspora delegations in Turkey, meetings with representatives of the public and other events in Ankara, Istanbul and Sakarya.

Atanur Akusba, head of the Federation of Abkhaz Cultural Centers (Abkhazfed), said that during the visit of the WAC in Turkey "there were many meetings and new acquaintances."

«We went to Ankara, talked with the authorities, informed them about the events we planned in Turkey and listened carefully to their opinions,» said Akusba.

He recalled that the delegation was warmly welcomed by the public of the Sakarya region and the Abkhaz Diaspora in Istanbul.

«We need to unite the Abkhaz-Abaza Diaspora in Turkey, to preserve the language, traditions and customs of our people - this is our main goal. We supported the candidacy of Mussa Ekzekov as Chairman of the WAC for the sake of this sacred goal, we believe in him. And we are ready to work,» concluded the head of Abkhazfed.

Akhmet Khapat, member of the Supreme Council of the Congress who resides permanently in Turkey, as a special advantage for the effective interaction of representatives of the Abaza people around the world, noted the unified multilingual web information portal of the WAC launched in September this year. 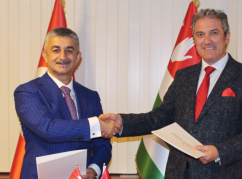 «I believe that we all should actively show ourselves in it: we need to register, exchange views. The portal can unite us, no matter where in the world we are. We will always be able to keep abreast of social and cultural events taking place in the historic homeland,» said Khapat.

The Chairman of the Federation of Caucasian Cultural Centers (Kaffed) Yashar Aslankaya, commenting on the results of meetings with the WAC and further plans, stressed that “the Kaffed family never departed from principles and ideas for the sake of unity” and will continue to work “as a non-governmental organization”.

«Like dear Mussa Ekzekov, I’m sure: together we will serve the public in all areas on the basis of a civic approach that is far from politics,» Aslankaya stressed.

The working visit of the delegation of the World Abaza Congress to the Republic of Turkey from October 21 to 25 is the second business trip of the WAC leadership to Turkey. The main purpose of the visit, according to Executive Secretary of the Congress Inar Gitsba, was a detailed discussion of the “road map”, outlined earlier. The second trip resulted in agreements and arrangements with Diaspora organizations, the system structure of the WAC and a detailed work plan for the Congress in Turkey.