Due to the pandemic, the World Abaza Congress and the public organization "AMCh" have postponed the project of children's educational leisure "Ashtra" for next summer.

The World Abaza Congress and the "AMCh" public organization decided to postpone the project on organizing children's educational leisure "Ashtra" due to the unfavorable situation with the spread of coronavirus in Abkhazia. The organizers explain that the project will resume in the summer of 2021 with a new, richer program.

"We managed to organize several excursions. During the trips, the children were told about the place they are in, from a historical point of view, interesting facts that they could not learn about from the school curriculum. The guys from the village of Dzhgerda went to Lykhnashta, visited the Lykhny temple, the palace complex of the 10th century.

Schoolchildren from Dranda, Tamysh, Uarcga visited Anakopia. It should be noted separately that not only schoolchildren saw this legendary place for the first time, but also their teachers first climbed the walls of a medieval fortress," said Ardzinba.

According to her, more than 80 children have already taken part in the project.

"This figure would have been higher if our plans had not been impeded by the epidemiological situation. The already planned trips of children from the Kaldakhuara boarding school to the Bedia temple and schoolchildren from both Lykhny schools to the Otap cave were canceled. It's a shame that our plans have not been fully implemented, but we hope that in the next summer holidays we will definitely go with the guys to the designated places," said Geta Ardzinba.

She stressed that the project would not have turned out so bright and memorable for all its participants" without the help and invaluable support of the head of the "AMCh" public organization Alisa Pachaliya. The very idea of educational trips for children from rural schools belongs to "AMCh": earlier the organization has already conducted similar excursions for children of the "Kiaraz" Charitable Organization.

During the tours, schoolchildren not only receive information about sights and history in an entertaining way, but also play various games, moreover, traditional, time-tested ones. Therefore, the organizer simultaneously manages to popularize this active occupation among children.

"The children played long-forgotten Abkhazian folk games, they were offered sports. Arsou Huapshukh, a third-year student at the St. Petersburg State Institute of Culture, specializing in stage directing, brilliantly performed this part. For the first time, the children learned the rules of the games "Dzhit", "Achyft", "Amba". For us, the organizers of the project, it was somewhat exciting: will children like these old games? After all, everyone knows how difficult it is today to offer an alternative to online games. It was thanks to Arsou Huapshukh, who managed to involve the children, energize them with excitement, the children played noisily and cheerfully the national Abkhazian games, and we, watching them, were happy about it. It was especially significant when children from Dzhgerda played "Ashypykusra" at Lykhnashta, since the description of this game for ethnographic literature was first made in the village of Lykhny," said the head of the WAC Women's Councils.

Children were given hot breakfast (delicious, yet hot buns from the "Akalat" confectionery, juices, fruits - ed.) during the trip on board. The guys had breakfast, and then went on tour singing Abkhazian songs and funny "chants", spent time in live communication with each other, with the staff of the Congress, representatives of the "AMCh" organization, a guide and volunteers. After the excursion, the whole team had a delicious picnic and games.

"There was another very interesting element in the program - we were accompanied by Slavik Amichba (Abkhazian singer of original songs – ed.), who sang war songs and his own songs about school years for children and teachers. On behalf of the WAC, we express our gratitude to the bard for the time allotted for our project, and for the sincere warmth that he gave the children!" said Ardzinba. 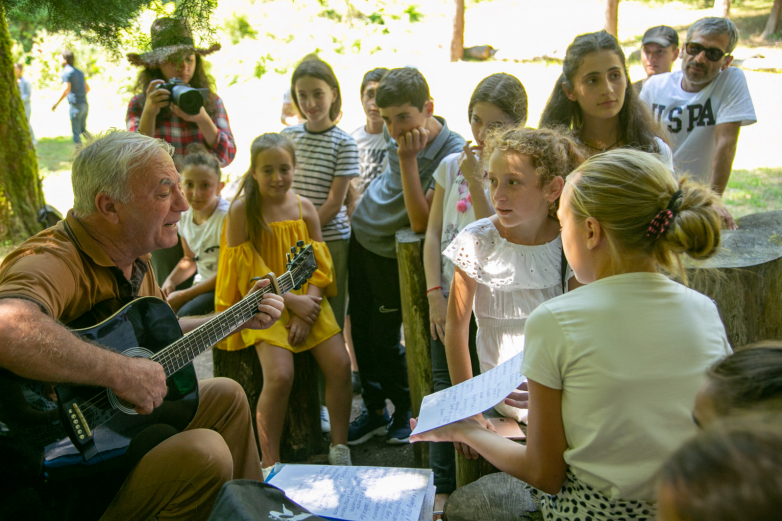 Tour to Afon and Anakopia for children within the "Ashtra" project, organized by the WAC and "AMCh"
© WAC / Naala Avidzba

She also noted the travel agency "Apsua-tour", having personally thanked its leader Elizaveta Malania for the excursions provided free of charge.

"Wonderful young specialists of the agency presented the material interactively, the children listened to every word and tried to remember the facts, dates, names from the course on the medieval history of Abkhazia," added the Head of the Women's Councils of the WAC.

Sandro Pachulia, a representative of the travel company "Apsua-tour", in turn, noted that the company's management immediately agreed to support the project; moreover, it was grateful that they were invited to become partners of "Ashtra".

"We could not help but support such an idea. When implementing tours for tourists, we must also remember about our citizens. Even more, we must show children the historically significant places of our Motherland," the company representative explained the position of "Apsua-tour".

Summing up what was done, Geta Ardzinba emphasized that, despite the difficult year of 2020 for everyone, it was possible to launch this important project, to understand the level of children's interest in Abkhazian games, the willingness of schools and teachers to take part in such a program.

"Now we are absolutely sure that such leisure time is simply necessary for children, and they like it. We are looking forward to next summer and new emotions," concluded the Head of the Women's Council of the WAC.

This conclusion can be confirmed by feedback from schoolteachers on the results of trips. In particular, the photographs of the compositions of the students of the Dranda Secondary School on the most memorable day of the past summer, sent to the WAC. Children, each in their own way, but equally sincerely and unanimously recalled the day they spent with the WAC in Anakopia. The WAC team was really pleased that such a day took place and became part of the personal history for the rural children.

Schoolboy Almas Tsvizhba from the village of Uarcha was in the Anakopia fortress for the first time, and he was very happy with this event.

"Already on the bus we were told interesting historical facts. We sang songs. Of course, I liked the excursion itself, and I liked the surprise even more - a picnic and Abkhazian folk games," the boy said.

Aynar Dzhindzholia from the village of Dzhgerda remembered how, together with his friends, he visited the iconic meadow of Lykhnashta in the village of Lykhny.

"When you are in the place where significant events took place, you experience special feelings. Thanks to all the organizers of this "cool" project," the student thanked.

Sandro Delba, a member of the WAC Youth Council, went on one of the excursions with children. In his opinion, such trips should be carried out "as often as possible." "I saw with what interest the children listened and watched. Many of them went on excursions for the first time. I am glad that I have become part of an organization that implements such important projects," said Sandro Delba.

The first excursion within the framework of the "Ashtra" project took place in August of this year. Within the framework of each of the six stages of the project, an informative and exciting excursion was to take place for children from different villages of Abkhazia. The project was scheduled to end on September 12, but due to the coronavirus pandemic, it will be continued and completed later.