New street garbage cans installed by members of the local council of the WAC in Gudauta.

Fifteen new garbage bins were installed in different parts of Gudauta by members of the council of the local branch of the World Abaza Congress.

The head of the council, Amra Lakoya, said that the idea of ​​installing bins arose in the early days of the formation of the local branch, “at the same time that it was decided to purchase and install new horizontal bars in the towns.” It is to be recalled that earlier, in October of this year, members of the WAC established horizontal bars in Gudauta, the so-called workouts, so that citizens could do street fitness. 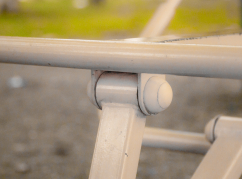 “Having completed the installation of horizontal bars, we decided to immediately take up the next project, the installation of bins, which are now practically absent in the town. There were a lot of discussions and suggestions about the design of the bins from different people, which means that they already know about us (and the council of the local branch of the WAC in Gudauta - ed.) and do not remain indifferent to our work.  And it’s very nice,” said Lakoya.

A fundraising campaign was announced for the manufacture and installation of bins.

“It is important that more citizens take part in our projects.  So far, these are the same people who helped with the first action.  This time, the main amount was contributed by two participants who did not want to make their names public.  During the week, an amount of 37 thousand rubles was collected, which allowed us to purchase 15 bins,” said Amra Lakoya.

The new bins were made locally and from quality material, so they should last for many years. They are installed on the main street of the town - Heroes Avenue.

“It may seem to some that 15 bins are not a big deal, but it is with such small and feasible things that you need to start, and not with grandiose words and promises that, as a rule, do not end with anything,” Lakoya said.

According to her, the initiative of the local council of the WAC was supported by the administration of the Gudauta district, which will install additional bins in the town, because the available ones are not enough today.  All new bins will be the same as those installed by the WAC.

“It was gratifying to hear that our action would be continued by the administration, and exactly the same bins would be ordered and installed,” Lakoya shared.

The new WAC project has already received approvals and expressions of gratitude from the townspeople.

Elizbar Smyr was born and raised in Gudauta and, despite the fact that he moved to Sukhum, always takes an active part in the life of his native town.  He knows Amra Lakoya and knows how important for her and for members of the council any work to improve the lives of people around.  The young man notes that the recently created local council of the WAC has already managed to positively recommend itself.

“This is a very important matter, as it carries a whole range of good deeds.  I wish the guys not to give up if they are confused. I am always ready to help - both morally, physically, and financially,” Smyr said.

Another resident of Gudauta, Madina Ajiba, also praised the initiative of the members of the local council of the WAC.

“Their contribution is very important for our town and our country.  If in each town of the country there will be such a group of young people who know the needs of their town and who are ready to find strength, money to improve the life of the town, then this will certainly give a visible effect very soon,” she said.

Commenting on another completed project and, in general, the work of the WAC through local councils, the Executive Secretary of the World Abaza Congress Inar Gitsba noted that local councils are “structural units of the organizational structure of the WAC”, and “socially active local residents become their members”, who are  motivated by the desire to improve the environment around us.”

“In general, the work of the local council of Gudauta is very revealing.  We have a lot of caring guys who try to be useful to their village, district, town and country as a whole.  Our task, in particular, is to identify and unite such initiative guys.  Gudauta guys are certainly an excellent role model and the right benchmark for all caring people,” said Gitsba.

The Council of the local branch of the World Abaza Congress in Gudauta was formed on October 3, 2019.  Its asset is made up by the head of Amra Lakoya and members of the Council: Inal Ankvab, Almaskhan Dzheniya and Khamida Gitsba.