Music is the folk treasure: how Abaza revive unique instruments and songs

Many members of the “Apkhyartsa” ensemble two years ago did not hold any musical instruments in their hands and did not know the notes - but meanwhile the newly created team almost immediately began to take prizes at festivals. The WAC correspondent found out how this was possible.

Folk instruments ensemble “Apkhyartsa” of the Center for Culture and Leisure of the Abaza Municipal District was created in November 2017. The collective included workers of the department of culture of the district administration and residents of the village of Inzhich-Chukun. Only two of the members of the ensemble have a musical education, most do not own musical notation. Even the head of the ensemble does not have a special musical education. However, not all this became an obstacle so that almost immediately after the formation of the collective, it began to win first places at festivals of the republican and international level. 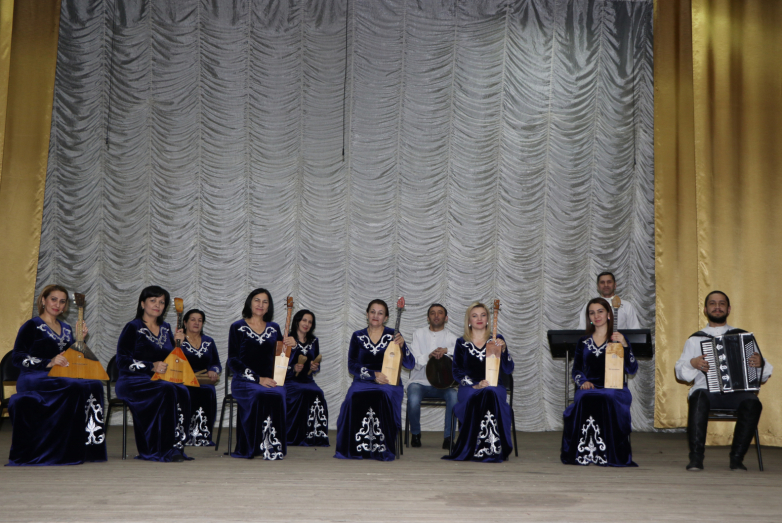 The performance of the “Apkhyartsa” ensemble on stage
© ANO “Alashara”

Inzhich-Chukun village is the administrative center of the Abaza district and has always been famous for its musical and theatrical traditions. It has its own ethnographic choir of elders, a puppet theater, and a children's choreographic ensemble. Now, thanks to the assistance and financial support of the public organization “Alashara”, an orchestra of folk instruments has appeared.

The musical traditions of the Abaza people need not only to be preserved, but also developed, residents of Inzhich-Chukun and other Abaza villages of the KChR are confident. The head of the department of education and culture of the administration of the Abaza district, Zemfira Murtazova, said that the creation of an ensemble of folk instruments was a long-standing dream of all the Abaza of Karachay-Cherkessia. The municipality prepared a draft project that received approval and a grant from “Alashara”. Musical instruments were purchased with these funds.

“We all understand that national melodies must be preserved and passed on to descendants. If you do not revive them now, they will all vanish, and then through generations no one will know and remember what melodies and songs our people had. Abaza have a very rich musical culture,” said Murtazova.

Rehearsals of the orchestra take place three times a week in the concert hall under the administration of the Abaza district. The collective repertoire includes Abaza, Abkhaz, Adyg ancient melodies.

When the head is Nart

Nart Sheozh is 30 years old. He is the youngest member of the team, but also the oldest. Nart is the artistic director of the Ensemble “Apkhyartsa”. Moreover, all the instruments of the orchestra are made by him.

He was born and raised in the Syrian city of Aleppo - in the very one that has been engulfed in war for many years. Five years ago, a young man moved to the homeland of his ancestors, in Adygea. He did not run away from hostilities, it was repatriation - the dream of a lifetime.

“I have been working since 12 years and changed many professions. I used to make furniture, was a photographer, an electric welder, worked in an advertising agency. All my life I saved up for moving. Finally, the necessary amount was collected, and I first came to Maykop,” Nart shared his memories. 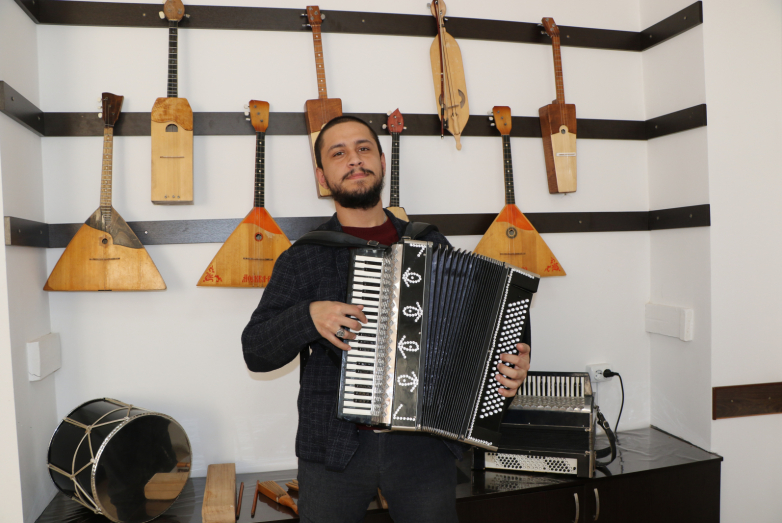 From early childhood, he was a musical child. All friends knew about it and brought a variety of musical instruments as gifts. Nart not only learned to play them on his own, but also figured out how they work. After school, he ran home to play, and the neighbors gathered in their apartments and even called the guests “to listen to a neighbor who will now begin to play behind the wall.” This is even more surprising because Nart’s parents have nothing to do with music, and no one in the family was fond of playing the instruments.

“In Syria, a musical culture is not developed at all. I never went to music school. And I began to receive special education only here in Russia,” said Nart. 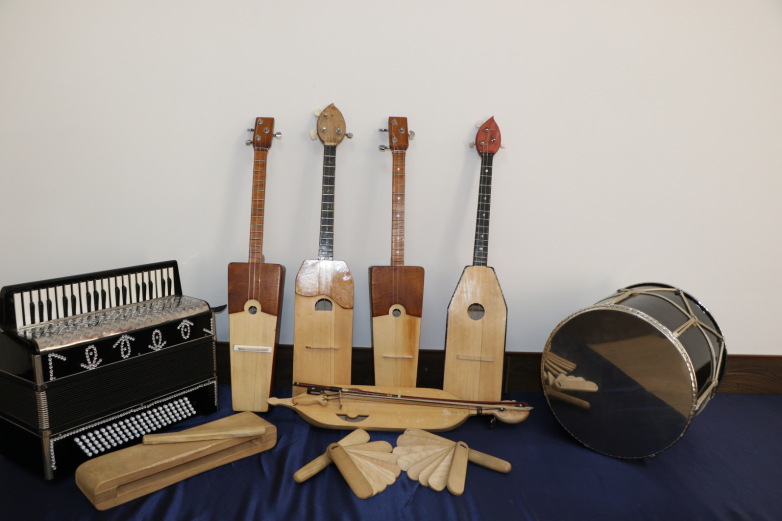 In Adygea, Nart was noticed by Zamudin Guchev, a well-known artist and craftsman in the Adyg folk instrument production in the Caucasus. He invited the young man to himself and taught everything that he could do. I just saw the work of Nart on Facebook and wanted to meet him. This man became the main teacher in the life of the musician.

“Our conversation started well,” recalls Nart, “because he did not try to emphasize that he was older, but kept it simple. It liberated me.”

Zamudin taught Nart: “An instrument is a friend, a brother, and a mother, a tool to help you in joy and sorrow.” 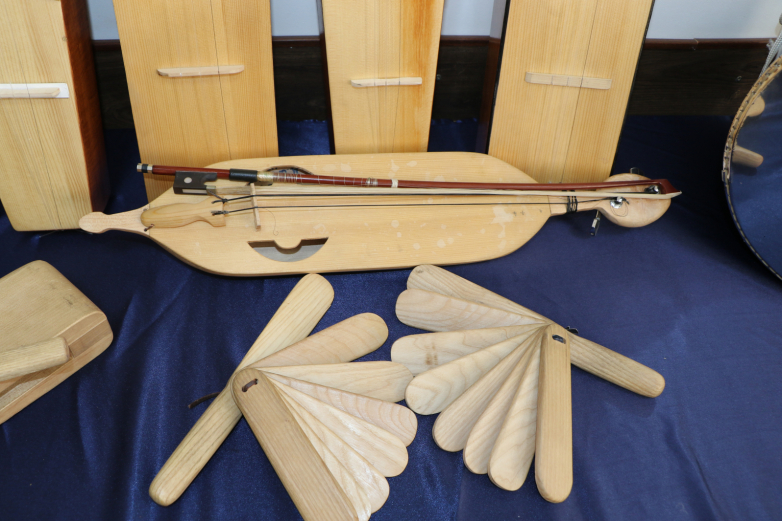 “Then I just throw it in the fireplace”

Soon the student achieved high mastery. Nart began to receive orders from different corners of the earth. He made tools for representatives of the Adyg and Abkhaz-Abaza Diasporas, for collectors of folk instruments, for various folk groups. He improved his products, honing his work for months.

“There is a perfect instrument in form, smooth, beautiful - but the sound is bad. Then I just throw it in the fireplace. I could make this instrument for three months, but if it did not sound well, then keeping it does not make sense. In our case, there are many subtleties that my teacher gave me and his teacher gave him. These are the secrets of craftsmen which are hundreds of years old. For example, the strings on this apapshina (Adyg string instrument of the balalaika type - ed.) made of horsehair. And for the old masters, it was important how old this horse was, what color it was, where it grew, how it was fed — it all mattered. The strings from the hair of a young and an old horse sound differently,” the musician said.

Nart moved from Maykop to Cherkessk, entered the local music school. At the entrance exam, when he played several pieces, the members of the commission were taken aback and specified whether he was planning to enter or came to get a job. Soon the young man got married and opened his own studio, where he continues to create Adyg and Abaza musical instruments. The phenomenality and amazing hearing of this young man is also confirmed by the fact that immediately after moving from Syria, he did not know Russian at all and learned it on his own ... in the market. 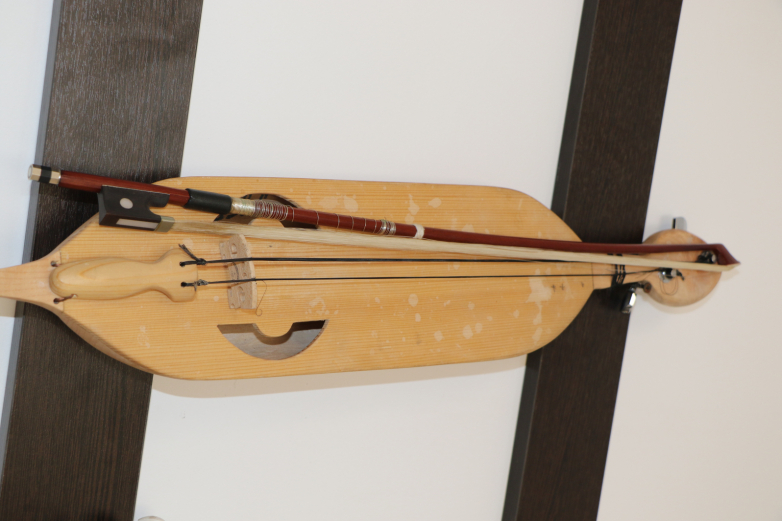 “I came to the local market every morning, got up at some intersection and listened. People talked, cursed, talked about themselves. I followed the reaction, gestures, facial expressions and listened to the language. I learned Russian phonetically,” Nart shared his memories.

Good craftsmen are pretty rare these days. Therefore, it is not surprising that the administration of the Abaza district, in the end, turned to Nart with a proposal to manufacture instruments and lead a new ensemble of folk instruments. He agreed without hesitation.

“I have dreamed about this all my life. In Syria, I had dreams that I was on stage,” admitted Nart.

Music as a medicine

The ensemble in Inzhich-Chukun received its name from the name of an old Abkhaz and Abaza musical instrument. Apkhyartsa is a stringed bow instrument, to the accompaniment of which historical and heroic songs were performed. In the old days, every military detachment had its own apkhyartsa players. They always went ahead of the troops. Hence the name of the instrument, which literally can be translated as “what encourages to go forward.” The ancestors of the Abkhaz and Abaza also believed that the music of the apkhyartsa was healing, and songs healed the sick. Today, in the age of advanced technologies, apkhyartsa is not used in medicine. However, no one undertakes to deny that music heals. 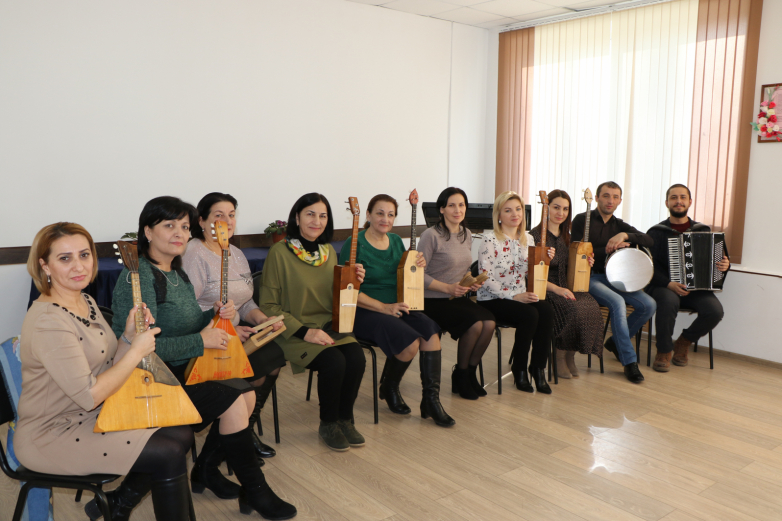 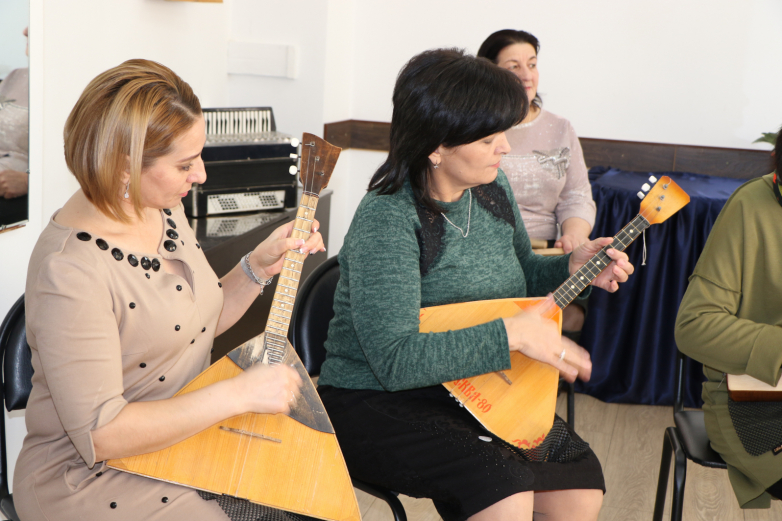 The ensemble’s instrument kit in Inzhich-Chukun also includes Adyg folk instruments: a string “apapshina” resembling a Russian balalaika, and a keyboard-pneumatic instrument “adyge pshine” or, as it is also called, an Adyg accordion. 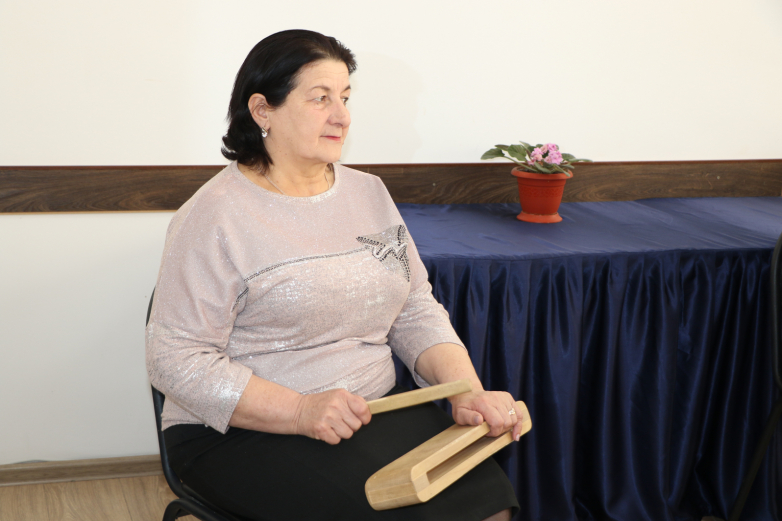 To save the precious

The musical culture of the Abaza people has been honed over the centuries. Folk songs tell about the glorious exploits, thoughts and aspirations of people of past centuries. All folk songwriting can be classified by genre. Here are ritual songs, and round dance, epic, lyrical, comic, historical-heroic and lament songs. These songs passed from person to person and have survived to this day. The first attempts to transfer these melodies to paper were made relatively recently, in Soviet times. 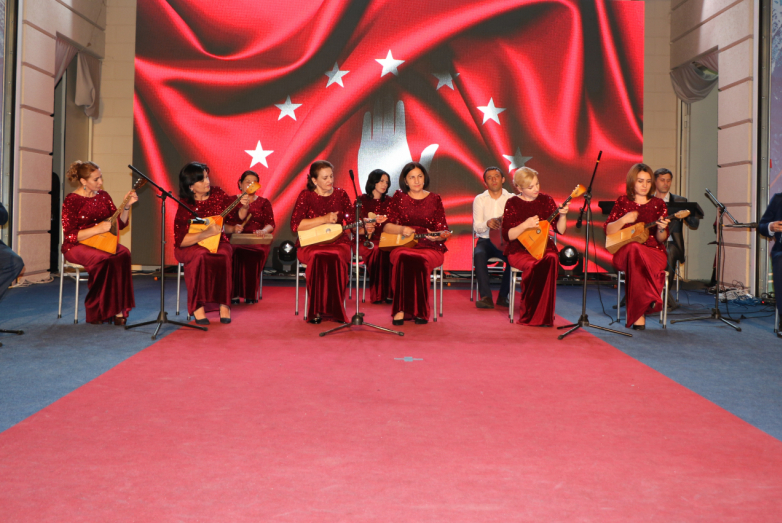 Performance of the “Apkhyartsa” ensemble at the Days of Culture of the People of Abaza, 2018-2019
© ANO “Alashara”

One can no longer find folk instruments in Abaza houses today, but, like hundreds years ago, not a single holiday can be held without traditional music. Therefore, musicians are honored guests in any home.

Playing folk music and even manufacturing of national musical instruments is a complex art. It must not be forgotten, Inzhich-Chukun residents are confident. They often think about music courses for children. Not only to save, but also to pass on to the young generation - the creed of the participants of the ensemble of Abaza folk instruments “Apkhyartsa”. 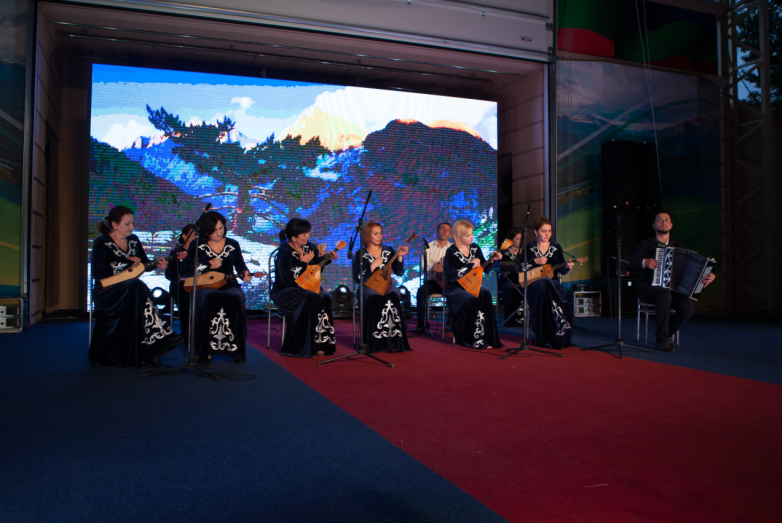 Performance of the “Apkhyartsa” ensemble at the Days of Culture of the People of Abaza, 2018-2019
© ANO “Alashara”
To leave a comment you need
to login or register.
Share
No comments

Abraskil spoke in English: WAC translated the Abkhazian cartoon
The Museum of Anthropology and Ethnography released a collection "Caucasus: Crossroads of Cultures"
All publications