The World Abaza Congress invited more than three hundred children to a big celebration, which was held in the capital of Abkhazia on International Children's Day.

The World Abaza Congress on International Children's Day on June 1 organized a children's holiday, which was attended by more than three hundred children from almost all areas of Abkhazia.  Among them were the wards of the Republican Children's Rehabilitation Center, the charitable organization “Kiaraz” and the Cultural and Charitable Foundation “Ashan”.

The evening was led by Honored Artist of the Republic of Abkhazia Jambul Jordania.  It was he who announced the opening of the holiday, after which the dancers from the ensemble of the national dance of the Ochamchira boarding school appeared on the scene.  They performed the incendiary dance “Abazinka”. 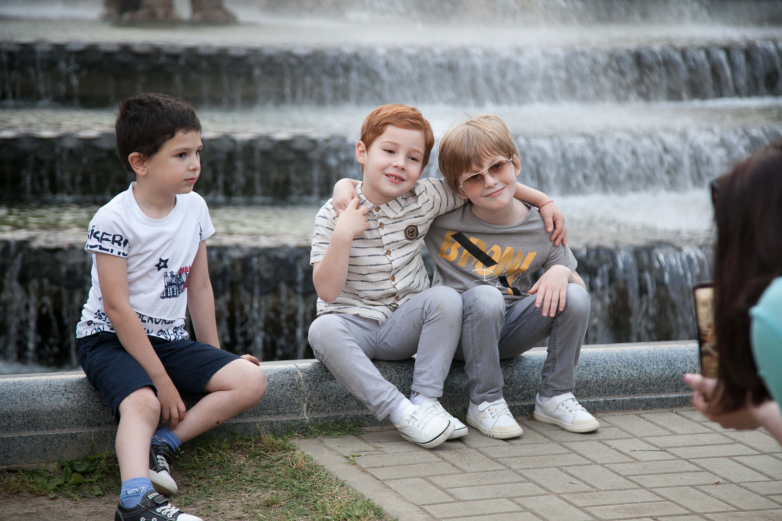 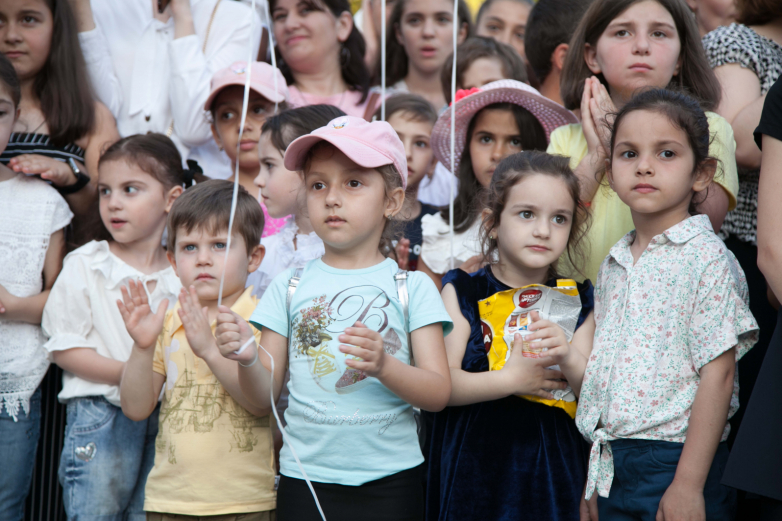 The Executive Secretary of the Congress, Inar Gitsba, congratulated all those who gathered on behalf of the Chairman of the Supreme Council of the WAC Mussa Ekzekov, and wished the children happiness, well-being and a peaceful sky above them.

A musical surprise awaited the guests of the holiday: the premiere of the new Abkhaz song “Имариам амҩа” (“The Hard way” - ed.) by Abkhaz composer Anri Gumba performed by the young singer from Ochamchira Saida Azizova. This song was written for the performer on the initiative of the World Abaza Congress. It is to be recalled that Saida Azizova is the owner of the special prize of the WAC, founded for the best performance of a song in the Abkhaz language in the vocal competition “Orpheus”: the specially written composition became the prize for her. Before performing it, the girl said thanks to everyone who was involved in the realization of her long-cherished dream - to sing her own song in front of a large number of people.

“Thank you very much, congratulations to all on the holiday!  I greet the World Abaza Congress and all the organizers of this holiday. Anri Gumba, of course, a special thank you.  I will not let you down,” Saida promised.

There were all sorts of exciting activities for the holiday guests.  So, in the framework of the program, there were unusual lessons.  The ecology lesson was conducted by the head of the nature department of the Abkhaz State Museum Taya Alanya, and the traffic rules lesson was organized by the Sukhum youth house. The teachers at the lessons of apsuara and good became the director of the secondary school “Alashara” Maria Pilia and the teacher of the Abkhaz language and literature Esma Matua.  Yana Pinchuk, a teacher at the Salvador art studio, conducted a master-class in fine arts for children and parents.  Each section was highlighted by a special plate.  The volunteers of the World Abaza Congress helped children and parents. 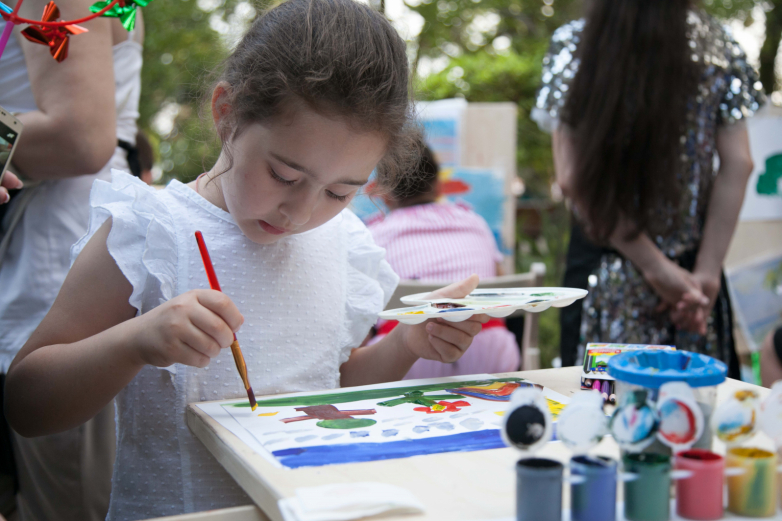 Especially popular was the aqua make up studio.  The children lined up and eagerly waited for images of their favorite cartoon characters to be painted on their faces.

Meanwhile, a concert program was continued on the stage with performances of dance groups - “Empire Dance”, dance studio “Path of Dance” and break-team “Apsny”.

The Youth and Women's Councils of the World Abaza Congress took an active part in organizing the holiday.

“We fully realize that children are our future, and we always try for them with more responsibility.  Our holiday is marked by national color, in the presented program there is a competition of national dances, a small concert program with songs in the Abkhaz language,” said the head of the Youth Council of the WAC Levan Torchua.

According to Torchua, the holiday is especially popular among parents and children, since such events are not very often held in Abkhazia.  “Considering the scale of the holiday, the number of contests, children's master classes and an entertainment program, the celebration of the International Children's Day is becoming one of the most interesting events for children and their parents,” said the head of the Youth Council of the Association. 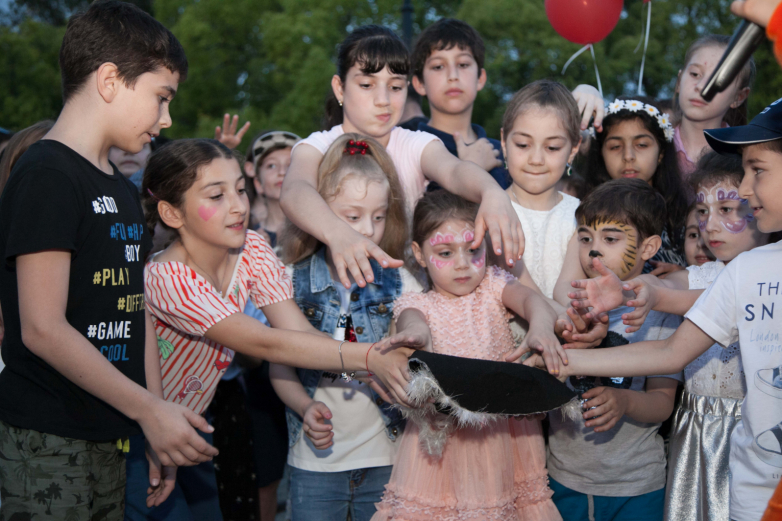 Torchua thanked on behalf of WAC the partners and friends of the Congress for their assistance in organizing the holiday - State Committee on Youth Policy and Sport, public organization “Open hand”, Rezo Zantariya, Denis Otyrba, Said Tania and Ruchis Ardzinba.

Member of the Women's Council of the WAC, Aza Gumba, noted that during the preparation of the event, activists of the WAC tried to engage deeply in the needs of the children and their parents.

“We are all mothers, and we are well aware that children need not only home comfort and care, they should feel the comfort and care of the town they live in.  Children need peace, they must live in joy.  Thank God that we can afford to celebrate this holiday today in our land.  Women's Council of the WAC tried very hard to diversify the program.  We are very happy to be involved in this holiday,” said Gumba.

Of course, the children themselves were mostly delighted about the holiday.

“I came to the holiday with my mom and dad.  It is very fun.  I liked everything very much,” said Miya Sangulia, a four-year girl from Sukhum. Despite the fatigue - from the fact that they had to “catch” children throughout the area — their parents were also satisfied.

“Thanks to the World Abaza Congress for the emotions that our children experienced.  They are truly happy.  This is a wonderful holiday, I want it to take place more often,” said Hamida Osia, who came with her son Cyril. The little guests of the holiday throughout the evening were entertained by life-size puppets in costumes of heroes of famous cartoons - Mickey Mouse, Alex the Lion, Kung Fu Panda, Bumblebee transformer, as well as stilts and magician.

All participants of the festive event in the finale of the evening were going to see another surprise - a paper show.  Children took it with great joy. International Children's Day is one of the oldest international holidays.  The decision to hold it was taken back in 1925 at the World Conference on Child Welfare in Geneva.  However, for the first time it was possible to celebrate this holiday only 25 years later - in 1950, after which it began to be held annually.  Children's Day is not only a children's holiday, it is also a reminder to the society of the need to protect the rights of the child, so that all children grow up happy, study, do what they love and in the future become wonderful parents and citizens of their country.

All COVID-19 sick recovered in Abkhazia
From 21 to 30: We speak Abkhazian / We speak Abaza
WAC and a deputy of the Sukhum City Council organized a children's party in the capital

WAC and a deputy of the Sukhum City Council organized a children's party in the capital
All COVID-19 sick recovered in Abkhazia
The Tower of broken hearts: annual excavations of the Great Abkhaz Wall have been completed
Another meeting of the members of the Supreme Council of the Congress was held online
All publications