WAC delegation is in Egypt on a working visit

Delegates of the World Abaza Congress arrived with a working visit in Egypt and met with the Abaza genus.

According to Inar Gitsba, one of the main tasks of the trip is acquaintance with the diaspora in Egypt and “establishing strong channels of communication”. An interesting feature of the Egyptian Abkhaz-Abaza Diaspora is that all of its members belong to the same genus Abaza and officially bear the surname Abaza, but not all families remember their historical surnames. 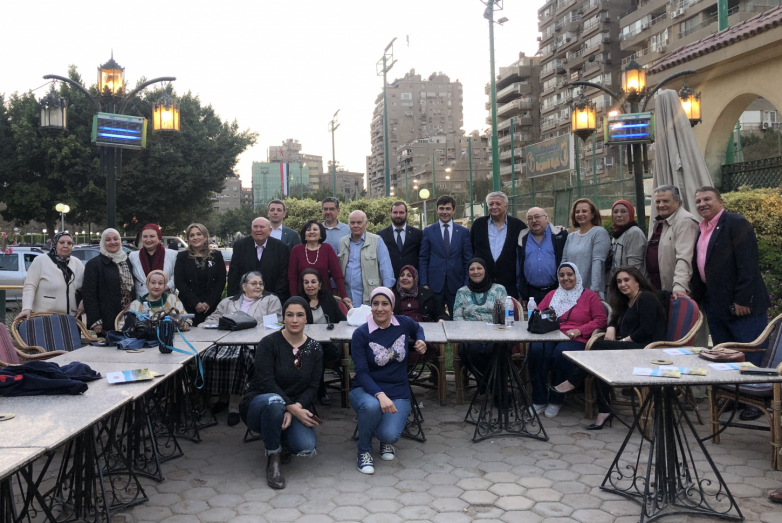 WAC delegation is in Egypt on a working visit
© WAC

Upon arrival in Cairo, the delegation was met by a representative of the genus, Rauf Abaza (Maan), who provided great assistance in organizing the program of the WAC stay in Egypt. Already on April 22, the first extended meeting with representatives of the Abaza clan was held in Giza.

“Our compatriots from Cairo, Alexandria and other regions of Egypt also came to the meeting. Many noted that they were meeting for the first time with compatriots from Abkhazia. The meeting was very soulful and held in a truly family atmosphere. A wide range of issues was discussed,” Gitsba said.

WAC delegates were told in detail about the way of life of the representatives of the Abaza genus.

“It turned out that the Diaspora structure of representatives of the Abaza family in Egypt has such informal bodies as the council of elders and the youth council. Due to certain political features [of Egypt], family gatherings were not held for a long time, [although earlier] they united from 500 to 1000 representatives of the genus,” said Gitsba.

He explained that for objective reasons, family meetings were devoid of traditional attributes of Abkhaz culture, such as national dances, songs, elements of folklore and traditional cuisine. However, at the meeting with the WAC, “the decision was made to try to organize a large meeting of the Abaza genus this fall.”

Representatives of the Congress, in turn, presented the activities of the WAC as an organization designed to strengthen the links of the Abkhaz-Abaza family throughout the world, cultivate ethno-cultural values, and promote the interaction of Diasporas with their historic homeland. After a detailed presentation, according to Gitsba, the participants of the meeting “were eager to fill their lives with traditional elements of culture, to get acquainted with it”.

“After all, as many have admitted, they always felt and knew that they were “different” added the executive secretary of the WAC.

Inver Alshundba, a member of the Supreme Council of the World Abaza Congress, noted that the “family atmosphere” of the meeting exceeded all expectations. Compatriots were keenly interested in how to come to their historic homeland, what opportunities do young people have to communicate with their peers and brothers.

“It was a holiday for all those present. I can say without exaggeration that it is at such moments that you understand the creative value of such meetings, you get a great desire of uniting our people even more,” said Inver Alshundba.

This assessment of the warm atmosphere was also supported by the representative of the Youth Council of the WAC, Alyas Asabua, who expressed regret, however, that the representatives of the Congress “did not meet anyone in the Abaza family who could speak Abkhaz or Abaza languages - both among the older and the younger generation”.

Within the framework of the current visit to Egypt, the WAC also plans to hold meetings with active representatives of the Diaspora, cultural figures, specialists on the history of the Abaza

genus with a view to developing initiatives launched during the first meeting, as well as exchanging views on the forms of further cooperation.

A local branch of the Congress was created at a meeting of representatives of the WAC with residents of Gal
WAC established the Council of the local branch in Ochamchira
WAC continues to hold meetings with residents of districts of Abkhazia: a local council has been created in Gagra
Members of the Supreme Council of the WAC summed up the work of the Congress at the meeting in Istanbul