Viacheslav Chirikba: the Welsh experience can help to preserve the Abkhaz language

Viacheslav Chirikba, Chairman of the Bagrat Shinkuba Abkhaz Language Foundation, member of the Supreme Council of the WAC, spoke about the methods of preserving the Abkhaz language using the example of the Wales experience in the UK.

International experience can help preserve the Abkhaz language, said Viacheslav Chirikba, head of the Bagrat Shinkuba Abkhaz Language Foundation, a member of the Supreme Council of the WAC.  In an interview with the WAC web information portal, he said that the Foundation he heads is using in its work a positive example of language preservation in Wales.

One of the four administrative and political parts of Great Britain, Wales, in the recent past, was faced with the problem of preserving its native language, which was solved.  Comprehensive steps were required for this, but thanks to them, the Welsh language is actively used today at all levels.

“World practice proves that it is possible to stop the fading of the language, its position can be strengthened, and it can develop.  In Wales, more and more children are learning their native language in kindergartens and schools, although many parents do not know it. It became alive, it is spoken in institutions, the local government, one has to speak it to occupy a well-paid public position.  And we should strive for such a model,” said Chirikba.

Viacheslav Chirikba explained that within the framework of the Welsh program, state bodies - local councils and the National Assembly of Wales use their native language as an official language, they publish official printed materials in it.  In 1982, “Channel 4, Wales”, was created, which is broadcasting in Welsh only.

“In accordance with the British Citizenship Act of 1981, proficiency of Welsh, along with English, is [in the UK] a condition for the naturalization of foreigners,” Chirikba emphasized, adding that by 2050 it is planned to increase the number of native speakers in Wales to one million.

At the same time, the Abkhaz scholar said that when the language development program was just launched in Wales, most of the older generation did not know their native language there.

“Our situation is the opposite: adults speak the Abkhaz language, but do not want to pass it on to children.  We need in the kindergarten and at school to strengthen and develop the language of those children who learned it in the family.  Therefore, separate methods, separate textbooks and separate groups are needed: for those who know the language, and for those who do not know the language.  This is the basis of a new and more effective, results-oriented approach,” explained the head of the Abkhaz Language Foundation.

Chirikba said that within the framework of the project of the ANO “Alashara”, with the financial support of the chairman of the Supreme Council of the WAC, Mussa Ekzekov, a study was conducted among preschool children and schoolchildren on the subject of knowledge of their native language.

“We worked in kindergartens and schools, in elementary grades.  According to research, the number of children who know the Abkhaz language well is no more than 30 percent.  It turns out that in 20 years a whole generation will grow up, practically not knowing their native language.  The Abkhaz language is losing its position quite quickly,” Viacheslav Chirikba emphasized. 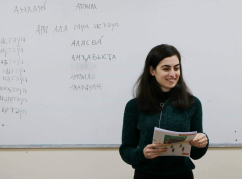 Recently, at the invitation of the Foundation and the ANO “Alashara”, Professor Havel Lewis, a specialist in the Welsh language and the salvation of minority languages, visited Abkhazia.

“He held seminars for our specialists, which turned out to be very interesting and useful.  We are going to continue to contact with Professor Lewis and are planning a return visit to Wales, as part of a program supported by Mussa Ekzekov, in order to get acquainted with their impressive experience on the spot and use it to strengthen the position of the Abkhaz and Abaza languages,” said Chirikba.

He added that the current system of teaching Abkhaz in educational institutions is ineffective, “mainly because it is designed for those children who know the Abkhaz language well, and there are a minority in the town.”

Viacheslav Chirikba also noted that although there is a desire among Abkhaz to learn their native language, they don’t want to waste energy for this.  “Yes, we want to learn our native language, but we are not ready to work on it,” he explained the position of the young Abkhaz urban population.

Currently, the Abkhaz Language Foundation is working on the translation of textbooks for preschool education.  These are Oxford University textbooks designed for foreigners to learn English.  According to Chirikba, the textbooks are now adapting to the Abkhaz language, but in general, the teaching methods proposed in them have long been tested and have given positive results.

“In the fall, an experimental group will be created in the kindergarten. It will consist of children who do not know their native language.  We will train them according to the new methodology,” Viacheslav Chirikba, Chairman of the Foundation, shared his immediate plans.

The Bagrat Shinkuba Abkhaz Language Foundation is working on the problems of preserving and developing the native language.  The Foundation creates new language teaching methods that meet modern realities.

Abkhazian language Viacheslav Chirikba
To leave a comment you need
to login or register.
Share
No comments

A stone with a face: a drawing of the Hero of Abkhazia Rauf Dzhikirba was found 30 years later
The transformation of national identity was discussed at the WAC Discussion Club
A delegation from the KBR headed by Vladimir Pshenokov visited the office of the WAC
"The Way to Harmony": a new project of the WAC was presented in Sukhum
All publications